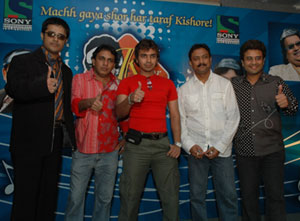 The contestants of K for Kishore, both old and new share a great bonding. Whenever they are together song and laughter are never far behind. The joker in the pack is one of the new Challengers Anil Srivastav who has all of them rolling in the aisles. The mutual admiration society that they have formed cannot be missed. Yet, behind all the fun and camaraderie they all mean serious business. Surprisingly, the Gujjubhais Nayan Rathod, Chetan Rana and Apurva seem to be outnumbering the Bengalis on the show. With only Arnab Chakraborty holding fort on behalf of the Babu Moshai!

Watch the challengers and contestants fight the K for Kishore battle head on this Friday - Saturday, February 29 and March 1 at 9.00 p.m. only on Sony Entertainment Television.

advil 12 years ago Music has no boundaries-m thats what we always knew.Then how come these days music or musician gets categorised by region?

Too_Much 12 years ago Hmmm..
woh heading thoda sahi nahi laagi..
means people like me might make a scene out of that..hahaha