View Profile
Diwali Dhamaka 'Golmaal Returns' has proved to be this years highest grosser so far! Produced by Shree Ashtavinayak Cine Vision Ltd. and directed by Rohit Shetty, the sequel had the biggest opening and is still going strong! 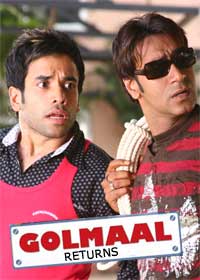 Cashing in on the festive season, the holidays have proved to be a boon for the producers who have witnessed an ecstatic response to the hilarious roller coaster starring Ajay Devgan, Kareena Kapoor, Arshad Warsi, Amrita Arora, Shreyas Talpade, Celina Jaitley, Tusshar Kapoor and Anjana Sukhani.


Ever since the film has released on Wednesday, the film has seen the past 3 days running to packed theatres. For eg, with Golmaal Returns, Chitra theatre has not only beaten all records for the past 9 yrs but also has been booked in advance for the next 9 days!


Exhibitors and Distributors are all thrilled with the film's response in not just the Mumbai Circuit but all over India too.


The film is a superhit in cities like Punjab, Hoshiapur, Jammu and while theatres in regions like CP Berar, Nagpur, Raipur and Amravati are also packed to capacity.


In small cities like Shimla, advance booking is full till next week!


To take a glimpse of the international response, in London alone, Golmaal Returns has collected nearly 40,000 pounds in just a single day!


With Golmaal Returning with such a bang, do we see a Golmaal 3 in the offing???