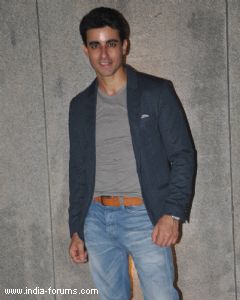 For television actor Gautam Rode, understanding a character and playing it to the best of his ability is more satisfying than hosting a show.

Gautam, who will host the sixth edition of celebrity dance show 'Nach Baliye' going on air on November 9 on Star Plus, is currently seen in the title role in the show 'Saraswatichandra'.

"Acting and anchoring are two sides of the same coin, but I prefer acting. I love playing a character and getting into the skin of it."

"Hosting for me is more like a stress buster and its all about having fun. But acting is my first love and will always remain my priority," Gautam said in an email interaction.

He then moved on to television with shows like 'Baa Bahu Aur Baby' and 'Lucky'.

The actor earlier anchored shows like 'India's Got Talent 3' and 'Nach Baliye 5' as well as featured in films like 'Annarth' and 'Agyaat'.

However, the 36-year-old still believes that his "journey has just begun".

"I believe I'm in a very good phase of my life currently. I still feel like a newcomer even today. Whenever I am doing something, I have a feeling that I am doing it for the first time and it is this excitement that keeps me alive," he said.

Anchoring is also a very important part of Gautam's career and he feels that it requires being oneself and creating a 'good comfort zone'.

"My mantra is to be yourself. In anchoring one needs to be as comfortable as possible not only in front of the camera, but to make the audience comfortable. The audience, judges, contestants all need to feel part of one large family," he said.

The actor has his plate full at the moment and does not feel he has the time to take up any new project.

"There are only 30 days in a month and I am already doing two shows - 'Saraswatichandra' and 'Nach Baliye'," he said.

realitysports 6 years ago Gautam Rode you are a brilliant actor. Bade rocked Nach.

beutifulppl 6 years ago Gautam Rode is an Outstanding actor and an Awesome Host ... Love him as Saras in Saraswatichandra as well as in Nach Baliye ...

realitysports 6 years ago Love ya Gautam Bade Rode. You are a Rock star.

twila 6 years ago Gautam Rode ... you are an ABSOLUTELY FANTASTIC Actor aswell as an Awesome Host... and your portrayal of Saras in Saraswatichandra is TRULY OUTSTANDINGG...

bahi. 6 years ago Omg I thought you were 31 but you are 36? Gosh Gautam Rode looks much younger. Hopefully you will find your baliye soon. You rock in Saraswatichandra.

keerthikittu 6 years ago Gautam Rode
Saraswatichandra. Waiting to see u as bade

..Rish.. 6 years ago Gautam Rode you are amazing in Saraswatichandra and like inNB5 , you will rock NB6 as well ! Gautam Rode rocks :*

masalababy 6 years ago We admire whatever you do Gautam Rode because of your immense talent.

star_wars 6 years ago Wishing you a wonderful weekend Gautam Rode. Looking forward to Nach. I know you will be fab. God bless.