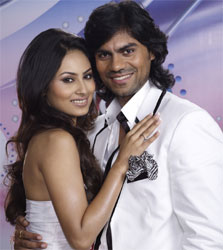 NDTV Imagine's Pati Patni Aur Woh is the latest twist amongst the reality television brouhaha that has taken our country by storm. The show puts the participant couples on a fast forward trip of parenthood where they are required to deal with pregnancy as well as infants, teenagers and adults as though they are their parents.

When Gaurav Chopra was questioned if his participation in the show with girlfriend Mouni Roy is an indication of taking his relationship a step ahead, he said, "Well, the fact is that we are here addressing the media about being part of such a show. That in itself suggests something."

So does it mean that Gaurav is surer about this relationship than his previous ones? Let's figure out, for this is what Gaurav had to say about it, "Well, let's leave all that mystery for now. You never know what I might say once the show ends."

Mouni who was sitting right next to him was hit by this blow. The girl didn't take it lying down though; she lividly asked him, "What did you say? Say again!" Gaurav coolly replied, "You never know what I might say once the show ends." Poor Mouni couldn't believe her ears and asked him the same question again and again, and Gaurav cheekily repeated the same answer again.

Well, we would really love to put the same question to Gaurav once this show ends. Till then, we wish the duo happy parenting!!

13 years ago Mouni is so high maintenance but she has a right to expect some kind of commitment from him, but judging from his past where he very easily used his relationship with Narayani for NB than why not this reality show too. Unless his words indicate he plans to use this platform to propose to her publicly.

+ 6
13 years ago i liked gaurav with narayani more

anyways all the best to them

+ 2
13 years ago He looks better with Narayani...Mouni looks too young for him!!

+ 5
13 years ago I prefer Mouni and Gaurav over Gaurav and narayani. Hopefully they last.

+ 3
13 years ago whatt wasnt he like married to narayani?
& mouni is way better than him .. + shes strong shes not guna take things so good for her!

13 years ago I'm on the same page as Yuvika_15. Well, I guess curiousity killed the cat. n it doesn't seem we'll be finding out so...

+ 2
13 years ago Go mouni! U tell him girl
PulMounz forever!