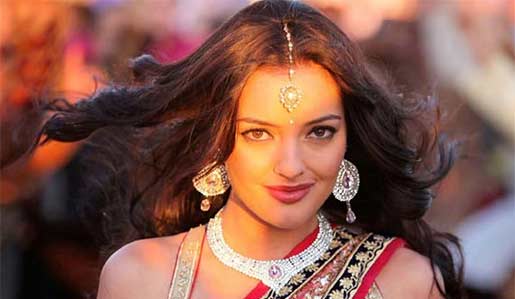 Actress Kristina Akheeva, who was last seen in "Yamla Pagla Deewana 2", says forthcoming Telugu romantic-drama "Galipatam" will present her in an avatar audiences have not seen her in so far.

"I really liked the story. Although I play a modern Telugu girl from abroad, it has a lot of scope for performance. It has unleashed the actor in me and the film is mostly based on emotions and acting," Kristina told IANS.

"I may still appear glamorous in the film, but the role has given me the opportunity to really act. The story is very progressive, bold and has not been attempted before in the language. It's not a typical love story that has been redone a million times," she said.

Kristina feels "nerve-wrecking" about audiences' response to her Telugu debut, but she hopes "people will accept her in the industry".

Although Akheeva is a newcomer to the filmdom, she says she never felt left out or discriminated while working.

"I've been extremely lucky and everybody I've worked with has accepted me. People are ready to give me a lot of time to understand and prepare, especially the dialogues, since I don't know the language. I always felt welcomed," she said.

But Kristina believes that it's one's "attitude" that eventually will earn him or her respect.

"You need to have the right attitude to be treated well. When I come to the sets, I'm extremely passionate about the work I do. I try to be really happy and warm with everyone. When people feel that vibe around me, they don't mind spending extra time to help me," she added.

"Galipatam", which is directed by Naveen Gandhi, also features Aadi Pudipeddi and Erica Fernandes in important roles. It releases Friday in cinemas.

Working with a young team was a lot of "fun", says Kristina, and added: "We all ended up being good friends. At the moment, they are on a promotional tour and I regret not being part of it as I'm busy shooting for my Kannada film".

Kristina is currently shooting for "Uppi 2" with Upendra.

She says she never aspires to play certain roles but once when asked in an interview, she said she would "love to play a village belle".

She was laughed at for the response but in "Uppi 2", she's actually playing a village girl.

"I play an Indian girl in a village in my Kannada debut. We are shooting in a village and I've proved all those who laughed at me wrong. The reason I love playing these roles is because they are not going to come to me easy," she said.

"I need to put a lot of time and effort to pull off this role. I don't want to always be playing a foreign girl. Challenging roles excite me," she added.

Kristina hasn't signed any new projects as she first wants "my Telugu film to release and see how I'm being accepted by people here".