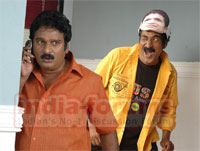 The film 'Gajibiji' with Ali and Venu Madhav in the lead roles has completed shooting and is now in postproduction. K Vasu is producing and directing the film on the Gayathri Arts banner. Yashwanth and Farzana play the young lovers in the film. Many comedians are also starring in the movie. Vandematharam Srinivas is the music director. There are five songs in the film. The audio will be released later this month and the film in January.