View Profile
To celebrate 60 years of Indian Independence, Star Plus has come up with its show Star Azaadi Express which will narrate the story of independent India in a language understood by every Indian, regardless of caste, creed or religion --- the language of music. 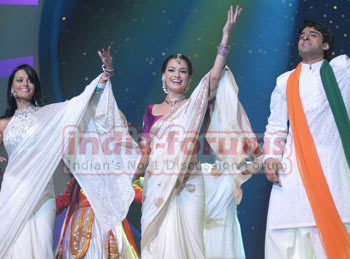 The power-packed event, scheduled to be aired on August 15, from 10 am to 1 pm, will feature everything from fusion to folk and will be hosted by comedy king Sajid Khan and the loveable Baa aka Sarita Joshi, of "Baa Bahoo Aur Baby".

The show salutes the spirit of this republic, its freedom, unity, integrity and solidarity through various exciting acts and performances strung together. In attendance would be biggies from Bollywood and the television industry, including Govinda, Dia Mirza, Reitesh Deshmukh, Geeta Basra, Anita Hasnandani, Eijaz Khan and Sanjeeda.

The programme's focus is to make Indians understand the true meaning of love, an emotion that has been emulated generation after generation, in many forms, over the centuries. Come, watch the freedom fest on Star Plus and celebrate India.

+ 3
15 years ago oopps wrong messaga!
thanks for this article!

+ 4
15 years ago Thanks..
Wow Eijaz and Anita really look awesome in the pic!