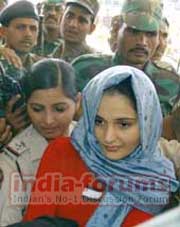 Hoshiarpur (Punjab), Nov 2 (IANS) Buoyed by the Supreme Court allowing her to move out of her village in Punjab's Hoshiarpur district to undertake film assignments, Monica Bedi is all set to try her luck in the Tamil, Telugu and Hindi film industry.

Monica, underworld don Abu Salem's former partner, has been living in Chabewal village, 10 km from here, ever since her release from a Hyderabad prison in July.

'I am very excited about the new projects on hand. I am thankful to the court for removing the restriction on my movement,' Monica said Friday at her paternal aunt's home in Chabewal village.

The court, while granting her bail this July, had directed her to stay in her ancestral village and not to move out of the state. A resident of Norway, Monica's passport is with the court.

Monica was arrested with Abu Salem from Lisbon in Portugal in 2002. She was deported to India in 2005 and faced forgery and other cases related to fake passports in Hyderabad and Bhopal courts.

Abu Salem is lodged in a Mumbai prison, facing charges of murder, terrorism and extortion.

Monica, who acted in a few Hindi movies, including 'Jodi No. 1' opposite big stars Sanjay Dutt and Govinda when Abu Salem used to call the shots in Bollywood in the late 1990s, has been approached with offers based on her life by film directors, family sources said.

Monica had visited the Sikh holy shrine of Harmandar Sahib (Golden Temple) twice to pay obeisance. She even cleaned utensils and made chapattis there as penance.