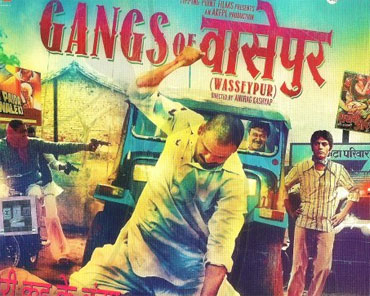 This is a classic one! For decades to come, the soundtrack of 'Gangs of Wasseypur' will be remembered as the comeback of the small town music in a modern avatar. A bow for Sneha Khanwalkar for combining folk music with modern sounds to perfection.

With 14 tracks, the album is pure bliss. Cheers to director Anurag Kashyap as well for delivering another musical treat after 'Dev D'.

First up is 'Jiya Tu' which manages to capture the essence of Bihar and Uttar Pradesh with its rustic Bhojpuri flavour, coupled well with modern techno beats.

Up next is 'Hunter'. It is the craziest song one has come across in recent times. Composer Khanwalkar is one of the rare female music directors in Bollywood, fourth to be precise and has done a wonderful job of combining Bhojpuri style with reggae elements. The lyrics in Hinglish are double meaning and hilarious to the core.

'Womaniya' again has a very bucolic feel with Khushboo Raaj and Rekha Jha giving it just the ideal treatment, well supported by the lyrics. The sound is very new-age and mixes well with their voices.

It is followed by 'Keh ke lunga', which is also like the punchline of the film. It is a slow yet enchanting number with Khanwalkar behind the mike. She is joined by Amit Trivedi. Together, they have created magic. The use of sounds and chorus is also very nice.

'Bhoos' transports you to rural heartland and is desi to the core. Public from Bihar and Uttar Pradesh would especially be mesmerised by its sound and vocals by Manish Tipu and Bhupesh Singh.

The next song 'Ik bagal' is one of the best songs in this album and it instantly hits you with its powerful lyrics, penned by Piyush Mishra. He has also crooned it. It's a lullaby, but with a difference.

Next on the playlist is 'Tain tain tu tu', which has minimal lyrics and more of music, followed by 'Soona ke gharwa', a Bhojpuri folk track, which truly touches your heart.

It is followed by a different, mellowed down version of 'Womaniya', which is quite good.

Then you have 'Manmauji', which lives up to its name. Flute has been used in the song and it has singer Usri Bannerjee giving you a feel of romance in a small town.

'Loonga longa' is one of the better remixes one has heard. It unites the two tracks 'Aye jawanon' and 'Keh ke loonga'.

The last on the lot is 'Humni ke chhodi ke', which has Muzaffarpur local Deepak Kumar giving it authenticity with his melodious voice.

Overall, the album deserves all the kudos for the folksy yet contemporary music.