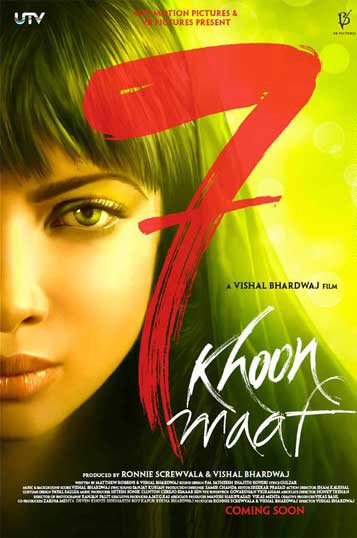 BollyCurry brings to you the first look of Vishal Bhardwaj's intriguing next, Saat Khoon Maaf.
The main lead played by Piggy Chops, will be seen portraying a negative character once again, after quite some time.
A drama, thriller and black comedy package rolled out into a single film, the plot line revolves around Sussane (Priyanka Chopra) and her journey to find true love which results in her marrying seven times round, with seven different husbands. Naseeruddin Shah, John Abraham, Neil Nitin Mukesh, Irrfan Khan, Annu Kapoor, Vivaan Shah [Naseeruddin's youngest son], and Russian actor Aleksandr Dyachenko have been rounded up for the said seven roles.

The film was set to release on New Years Eve but has tentatively been postponed to February 18th, 2011.
Author: Harjot D.
13 Likes

Kangana Slams Anushka for Raising her Voice Against ...
4 minutes ago

'RadhaKrishn' Fame Vaidehi Nair Roped in For 'Brahmarakshas ...
9 minutes ago