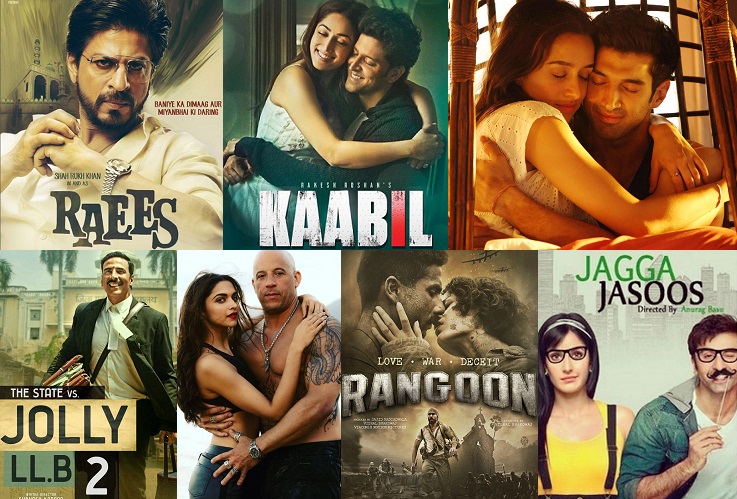 There were not too many outstanding Bollywood films in 2016. The some that came were lapped up greedily. 2017 seems to have a richer, more prolific slew of celluloid yummies for cineastes.

Here's a look at the purported cream of the crop:

* "OK Jaanu": Shaad Ali, as we all know by now, is at his best while remaking his mentor Mani Ratnam's films. Remember "Saathiya"? So let's see what Shaad has done to Mani's Tamil film "Ok Kadhal Kalmani". In the teasers, Aditya Roy Kapoor and Shraddha Kapoor do not convey even half the 'aashiqui' of Dulquer Salman and Nitya Menon in the original. But let's see. Releasing January 13.

* "Jolly LLB 2": Akshay Kumar was part of the stunning "Airlift" in January 2016. His first release for 2017 is a sure-shot winner. Akshay plays a wastrel lawyer whose life changes with an important case. Subhash Kapoor, whose last film "Guddu Rangeela" tanked badly, needs a hit. Releasing February 10.

* "Sarkar 3": Few would dispute that "Sarkar" was Ram Gopal Varma's only watchable film in recent times. Though Ramu has messed up with Bachchan in "Aag", we shall give him the benefit of the 'clout'. Releasing on March 17.

* "Jagga Jasoos": At last, Anurag Basu's quirky film about a young detective's search for his father. The film has Ranbir Kapoor as an animal lover. We should expect Ranbir to have more chemistry with the animals than Katrina Kaif. Releasing April 7.

* "Noor": Sunhil Sippy directs this movie adaptation of Saba Imtiaz's novel "Karachi, I Love You". Sonakshi Sinha, who proved a dud in the title role in "Akira", promises to make up for lost time. Releasing on April 21.

* "Half Girlfriend": Chetan Bhagat's silly stereotypical novel about a Bihari boy chasing down his beloved, pairs Arjun Kapoor with Shraddha Kapoor for the first time. How exciting. Releasing on May 19.

* "The Ring" (working title): Imtiaz Ali gets together with Shah Rukh Khan and Anushka Sharma for the first time. Intriguing. Releases August 11.

* "Crack": Akshay Kumar teams up with his "Special 26" and "Baby" director Neeraj Pandey to own the Independence Day weekend. Releasing August 11.

* "Simran": Hansal Mehta teams up with Kangana Ranaut for a comedy set in the US. Releasing September 15.

* "Judwaa 2": Varun Dhawan takes over the franchise from Salman Khan. Would he be as entertaining in a double role as the original? We'll know on September 29.

* "Padmavati": Sanjay Leela Bhansali helms the most expensive Indian film ever produced by Viacom18. Deepika Padukone plays the title role in this lavish costume drama. Ranveer Singh and Shahid Kapoor are the two men in her life. Wow! Releasing November 17.

* "Tiger Zinda Hai": Since Aamir Khan has no Christmas release in 2017, his friend Salman takes over the slot with this sequel to "Ek Tha Tiger", directed by "Sultan" director Ali Abbas Zafar. Releasing December 24.

ChickenSoup 3 years ago No one will watch Jagga Jasoos. How come they didnt add Baadshaho? It has Ajay Devgan and Emraan Hashmi coming back together after OUATIM and DTBHJ.