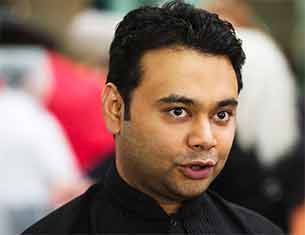 He received appreciation from fans and critics alike for his debut venture "Band Baaja Baaraat" and director Maneesh Sharma has donned the producer's hat with "Dum Laga Ke Haisha". He feels that films with good content always do well commercially, even if they are not promoted with excessive pomp and show.

"As a producer I feel promotions are really important but I also feel that if your content works, things work. It's really important that the movie has good content because that's what attracts the audiences in the first place," Sharma told IANS in a telephonic interview from Mumbai.

"There are different ways to promote a film. People hop from one TV channel to another, media interviews, city visits etc and the like, but despite all of this, if the basic content is not able to pull the audiences, all of this will go in vain," he added.

He is the first independent producer to be fostered by production house Yash Raj Films (YRF) under its new initiative.

What did he feel about the initiative?

"It's a new idea to promote new talent. It will give filmmakers the opportunity to try out different genres and make more films. It's definitely going to give filmmaking a very futuristic side.

"Moreover, doing this I feel Adi (YRF head honcho Aditya Chopra) will get time to concentrate on directing films as it's been long since he has directed one. He is raising the bar in filmmaking and setting a new benchmark by doing this," Sharma said.

Sharma worked as an assistant director for movies like "Fanaa", "Aaja Nachle" and "Rab Ne Bana Di Jodi" and made his directorial debut with "Band Baaja Baaraat", which featured Ranveer Singh and Anushka Sharma in the lead roles.

He then went on to direct "Ladies vs Ricky Bahl" and "Shuddh Desi Romance", but he says he still has the same feeling producing a film that he had while directing one.

"The experience is still the same. It's like a continuation of the same feeling. But dabbling with your directorial ventures and scripts, you don't get time to be creative, so it is exciting in that sense," Sharma said.

Asked if YRF presenting the film made things easier, he said: "Yes, it has made things easy for me. There is a definite cushioning for me and it is a big relief. Moreover, it gives me an option to focus on the creative aspects."

"The film being associated to YRF will surely help creating a buzz, but at the end of the day, the business will still depend on the audiences. Nobody can force a viewer's mind to watch a movie. So, the business bit is still not sure," he added.

"Dum Laga Ke Haisha", directed by Sharat Katariya, features Ayushmann Khurrana as the male lead. The female lead is a new face and the name will be announced soon.

"'Dum Laga Ke Haisha' is a very light-hearted romantic film. It is a simple, sweet and quirky film set in a small town. The lead actress is a new girl and we will be announcing her name soon. The budget is not big. It is a mid-sized film and does not require a big budget," he said.

"But I do agree that for the movie to have a certain reach, a cost needs to be paid. So, once the movie's first cut is ready we will start doing the promotional rounds."

Kareena Kapoor Khan’s 40th Birthday: Inside Pics give ...
a minute ago

Fire erupts at NCB office building in Mumbai; No injuries ...
12 minutes ago