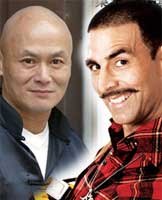 Akshay Kumar got to do some heady action sequences in Nikhil Advani's forthcoming 'From Chandni Chowk To China', but the action hero says fighting with Chinese martial arts master Gordon Liu was the toughest part of the film.

'I have watched '36 Chambers of Shaolin' 52 times before doing the film. Doing action for it and fighting with the Chinese masters, particularly Sir Gordon Liu, was the most difficult in the movie,' said Akshay.


Gordon Liu is known for his acts in Hollywood films like the 'Kill Bill' series and the 'Shaolin' series, including '36 Chambers of Shaolin'.


In 'Chandni Chowk to China', Akshay plays a simple cook from Delhi who goes to China to try his luck there.


'Getting into the character was not difficult as I have been a cook in my real life, but shooting for the movie has been a difficult experience,' Akshay told reporters at the film's music release here Tuesday.


'We have shot at the Great Wall of China and shooting there in extreme cold conditions was quite tough,' he said.

The film, which has been shot in China and Bangkok, also stars Deepika Padukone in a double role.


'Playing two different characters was quite challenging for me as they are so contrasting in nature,' said Deepika, who played a double role in her debut film 'Om Shanti Om' as well.


'One is an Indian girl with traditional values and the other a Chinese girl, who is bold and sexy and does a lot of action,' she added.


'I had to go for a complete look change for both the roles, which made things quite difficult for me. Besides, doing an action film with someone like Akshay Kumar is quite challenging,' said Deepika.