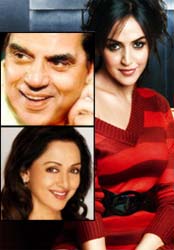 After appearing with sons Sunny and Bobby Deol in Anil Sharma's Apne, Tell Me Oh Khuda will see Dharmendra and Esha playing reel-life father and daughter.


The person behind the pairing is none other than Hema Malini who recently took it upon herself to relaunch her daughters career.


Appearing in a 'de-glammed' look, Tell Me Oh Khuda will see Esha's on-screen character on a journey to find her biological parents.  Apparently the actress had also learn how to ride a camel!


Additionally, the movie was shot in three different continents with three different cinematographers.  Whilst Rishi Kapoor joined Esha in Turkey, the actress is currently shooting with Vinod Khanna in Jaisalmer.
8 Likes