View Profile
Shraddha Kapoor is on a career high with a blockbuster in tow and one of the most awaited movies of this year, Ek Villain, in her kitty. Even if she might have been receiving snide remarks for her styling in the movie being similar to her previous release, the Fashion Police likes to keep itself away from such petty issues and ventures into what Ms. Kapoor has actually displayed in her reality. Along with her heartthrob of a co-star, Sidharth Malhotra, Kapoor has been on a high voltage promotional spree around the nation for Ek Villain and we have gathered for you some of her best and some better be forgotten looks through it all. 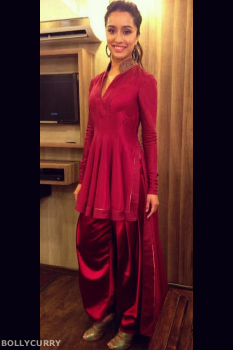 Catering to her girl-next-door image, Kapoor stepped out in a magenta colored Tarun Tahiliani ensemble inspired by dhoti draping. A tricky dress by the applauded designer in what might be called bohemian but in a more classic Indian way. Very few could have worked this outfit but it had Ms. Kapoor's name written all over it. Pulled back hair, metallic jewelry, some chunky silver heels and natural make-up made Kapoor look earthy and serene. 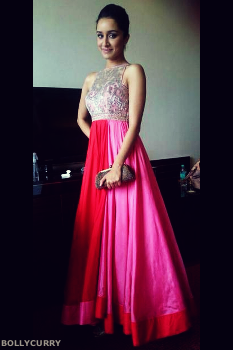 From tricky to truce, Kapoor chose her next outfit with much less fuss and was seen wearing an Anushree Reddy anarkali in different shades of pink. The simple outfit consisted of a pretty floral bodice made in silver zari and a flared ankle length asymmetrical skirt, making Kapoor look really cute and charming. A hairdo, neutral make-up, beaded clutch and silver sandals completed her gorgeous look. 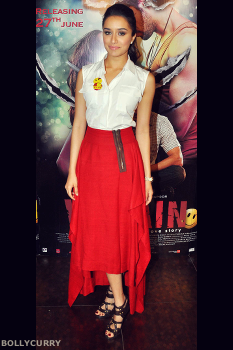 Changing things up a bit, Kapoor shifted from traditional to western and opted for a blood red skirt by Payal Khandwala. The asymmetrical skirt with an interesting bit of front zipper was paired with a sleeveless white button down shirt and black Gucci sandals. What could have been a nice but passable look was made noticeable by Kapoor's styling and make-up. The little rumple looking attire with the sleek ponytail, toned down make-up, smokey eyes and neutral lips made Kapoor look quite seductive. 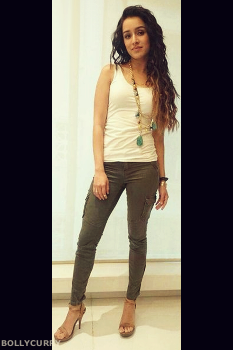 Channelizing her laid back nature into her next sighting, Kapoor chose to go the easy way. But that does not mean she failed to make an impact. Dressed down in a Zara white tank top and khaki skinny pants, she looked utterly delicious. Natural make-up, tumbled curled hair and a Pipa Bella turquoise stone necklace completed her chick look. And even if some may not be liking her two toned hair, a gift of extensions, sometimes like here, just added to her perfection. 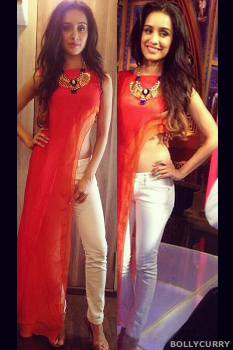 Not everything has been gold for Kapoor in this voyage. At the very start of the promotions for Ek Villain, Kapoor was spotted in a Suman Nathwani top paired with white skinny pants. As interesting as the design of the top was, this geometry experiment had nothing going for it except for the color. More importantly, Kapoor seemed to lack the attitude which make such designs work. The styling too was amateurish and snooze worthy. The statement necklace by Nitya Arora under Valliyan did catch the eye but was definitely out of place. 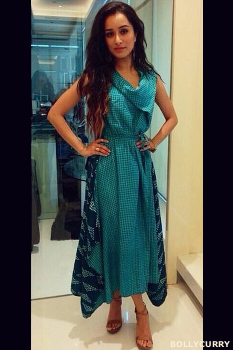 We do not disgrace simplicity but then we do have a certain definition of it which seems to be missing Ms. Kapoor by mere inches and that makes all the difference. Choosing a Myoho by Kiran and Megha, both the designers and Kapoor had us questioning the need for such disasters. The attire was nothing short of a bed sheet with holes for the head and arms and did nothing to accentuate Kapoor's beauty or svelte figure. And the repetition of the same shoes has been sadly noted. 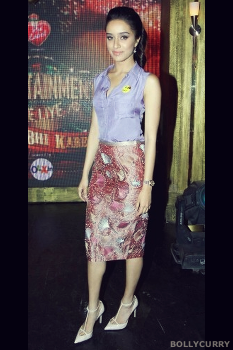 Continuing with the hard work of promoting a film, Kapoor made an appearance on the television show Entertainment Ke Liye Kuch Bhi Karega wearing a lavender Sanchita top and Nachiket Barve skirt. If there had been an award for something so utterly mismatched, we would surely not forget to nominate this ensemble of Ms. Kapoor. Even if we do look past the blunder, the material and design of that skirt makes us cringe in a rather obscene way. Finishing the look with blush Zara sandals, which again seemed something of a disgrace to the label, the only thing we loved was Kapoor neck up. 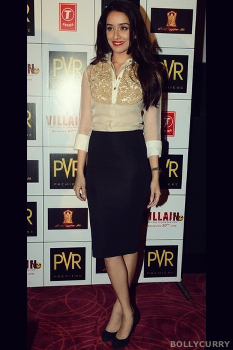 For a promotional event in Delhi, Kapoor chose a formal look and dressed in a Pankaj and Nidhi top and Debenhams pencil skirt. Kapoor has a rather individual sense of style which keeps the way for experimentation open for her, and sometimes that is what actually is required rather than the typical. Her attire seemed too boring even though the top had potential. The hair looked lackluster, there wasn't anything seductive about it unless Kapoor was trying for a failed attempt at the bedhead look. The usual black pumps added more yawns and the styling just took a jump in dirty waters with that badly applied lipstick, though we really liked the color.

Coming to the end of our journey of Shraddha Kapoor's style file for Ek Villain's promotion, we would like to add that Ms. Kapoor seems not to shy away from any kind of clothes, styling or added baggage, but we would surely like to voice our concern for her descend towards being sartorial in choices and repetitive in presentation. With such an old world charm beauty like hers, there is hardly any stopping her if only Ms. Kapoor leaves her school girl attitude behind. Do you agree with us? Or do her preferences seem absolutely fine to you? Be our guests and drop your views and thoughts in the comment section below.