As expected, FASHION has created quite a storm ever since it's first look was unleashed along with KISMAT KONNECTION over the weekend gone by.

A film coming from Madhur Bhandarkar is always special and when glamor, sex and controversies come together, something which is expected in FASHION, along with an engaging storyline, it is but obvious that a film creates a widespread buzz months before the release of the film. 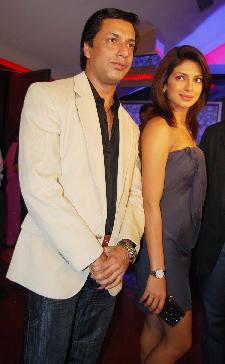 Something similar was observed in case of FASHION which, in spite of being 4 months away, has managed to create quite a stir after it's teaser was unleashed at theaters.

Glossy, thrilling, exciting and intriguing are just some of the words to describe the well cut teaser of FASHION which, though centered on Priyanka Chopra (who aspires of being a supermodel, and not just a model), also showcases Kangana Ranaut and debutant Mugdha Godse at good length.

In fact popular ramp model Mugdha Godse is quite a revelation as she is seen on the big screen for the first time ever and that too in the kind of costumes (she walks the ramp in the film as well) which would generate quite some heat in days to come.

Says an industry insider, "FASHION has been in news for all these months but the reaction it has received since the teasers have been out is phenomenal. Exhibitors from places as far as Patna are enquiring about the release timing of the film. They are excited since FASHION looks like a good source of moolah for them."

A source from Mumbai adds, "When a special screening of the first look of FASHION was done for a select gathering, it had to be repeated thrice due to popular demand. One has heard about requests for a song from a film to be repeated but to have something like this done for a teaser is unprecedented. No wonder, the film has picked on further heat ever since then."