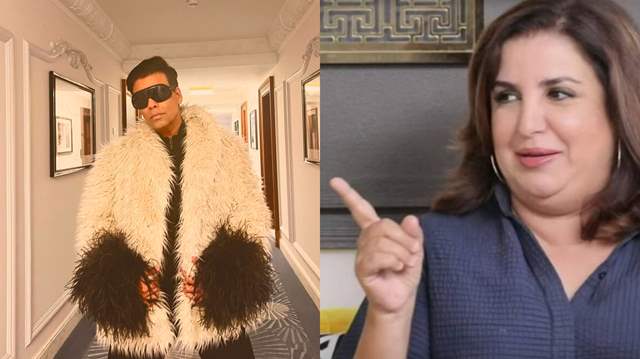 Farah Khan and Karan Johar share a timeless friendship. They frequently socialize and collaborate. They also engage in amusing social media banter, which delights their followers. Karan recently shared some shots from his recent photoshoot on his Instagram account.

In these pictures, the filmmaker can be seen wearing a faux leather jacket, black goggles, and red shoes. The post was captioned as,

"The corridors of Claridges and couture! In @gucci.''

As soon as he shared the pictures, fans dropped love in the comments section.

But what caught our attention is Farah's comment. She roasted KJo and called his jacket an ‘ostrich outfit.' She wrote,

“This ostrich outfit was crying out for a video.”

Farah wasn't the only one who roasted Karan for his extravagant outfit. Fans joined in soon enough. One compared his sartorial choice to Ranveer Singh's extravagant looks and commented,

Others compared the jacket to a bear. "Bhaalu aaya (Bear is here)," one quipped.

Meanwhile, Farah recently attended the wedding of Farhan Akhtar and Shibani Dandekar in Khandala. Following the ceremony, the filmmaker shared a photo with the new bride and groom on her Instagram account. Farah also danced with Farhan and Hrithik Roshan at the wedding. Their wedding images have gone popular on social media.

Karan , on the other hand, shares the judge's panel of Hunarbaaz with Mithun Chakraborty and Parineeti Chopra. He is also set to return to feature film direction after Ae Dil Hai Mushkil (2016) with Rocky Aur Rani Ki Prem Kahani. The film stars Ranveer Singh and Alia Bhatt in the lead roles, with Dharmendra, Shabana Azmi and Jaya Bachchan playing supporting parts.