Faizal Raza Khan, who is popularly known for his ‘Bad Man’ roles in television, will be seen in a positive and sweet role in Star Plus’ long-running afternoon serial Kumkum Pyaara Sa Bandhan. 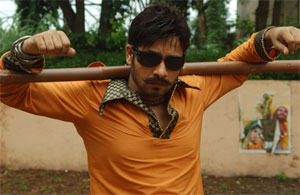 Featured Video
“I play the character of a Jhat, Surjan Singh. He is very positive, a true person by heart. If I have to say more about the character, it will be like Akshay Kumar in Singh is Kinng”, says Faizal. The actor will be seen in an unusual look here. “I always hold a lathi(stick) in my hand and my trademark dialogue is “Mooch Nahi Toh Kuch Nahi”, adds he.

As per our source, his will be a cameo role and will play the parallel lead in the serial. “He makes his entry as the guy who got married to Kumkum in childhood. He is very much in love with Kumkum and wants to get her at any cost. Things go haywire for Sumit and Kumkum when Surjan’s chela Lakhan reveals to him that Sumit and Kumkum are just bonded by a contract marriage”.

So will the actor again get back to his negative best after knowing the secret of Sumit and Kumkum?? Only time will tell!!

+ 3
14 years ago glad that faisal is playing a positive role for a change.. looking forward to it..

14 years ago hey well this man is really funny..oh poor kk i think she should run from there between sumit and surjan...........anyways i hope he remains positive

looking foward to it

+ 7
14 years ago WHAT wasnt chanchal enough, hey Chanchal and him will make a better jodi, who wanted this angle, am quiting this show unless this track ends, saas vs bahu will b a place where i can watch Hussain!! and also SUKK onscreen pair together in diff ishtyle!!

just feel tht this is a temp replacement to make way for huju's absence..

looking forward to seeing him.

14 years ago wowwwwwww....Faizal is coolll...looking forward to watching him in Kk...and the more problems there are for SuKk...the more closer they will get.....soo...this is going to be really awesome!!!!...yeahhh....now Su and Kk will be jealous of each other...soo much fun!!!