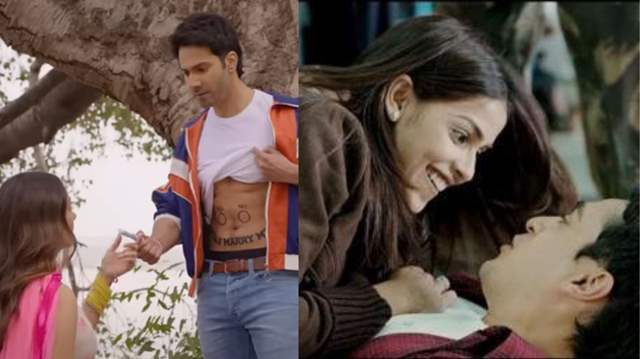 We have always blamed Bollywood films, especially rom coms to raise our expectations and set unrealistic standards about dreamy proposals and romantic love stories. We have always expected such out-of-the-world gestures from our loved ones who would pop up at the airport to stop and propose to you or stop their car in the middle of the road and propose to you.

Well, Bollywood has always been about the fantasy world and we have been prey to its unrealistic portrayal of expressing your love. So here are some of the best proposal scenes from Bollywood films that still give you butterflies in the stomach and awaken your filmy desires-

Now that requires guts. Crashing the sangeet night of your lover and then confessing your love for her, that's a huge deal. Aakash gets on his knee and expresses his feelings for Shalini in front of his fiance and then wins her over.

Bunny and Naina's proposal scene is surreal yet sweet. An overly ambitious man who fears commitment walks up to his lover and asks her to travel the world with him.

Bittu and Shruti's relationship was as crisp as the bread pakora and Bittu proved the saying Better late than never as he finally confessed his love to Shruti and made us swoon over them.

Might appear too cringy, but we can't deny that this scene is kind of a guilty pleasure as well. Kukko getting the proposal question inked onto his body and asking Naina to marry him was unique as well as surprising.

Every girl's ideal proposal entails Emraan Hashmi turning his car in the middle of the street and getting down on one knee.

Which one is your favourite proposal scene? Let us know in the comments section.

+ 2
3 months ago dil chahta hai's one was thrilling!