View Profile
Prakash Mehra, the creator of extraordinary films like Mela, Zanjeer, Namak Halaal, Sharaabi, Muqaddar ka Sikander and many more, passed away on Sunday due to prolonged illness and multi-organ failure in Kokilaben Dhirubhai Ambani Hospital, said family sources. He was 69 and is survived by his three sons -- Sumeet, Amit and Puneet. 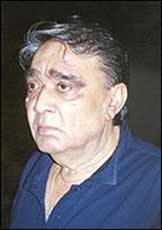 Featured Video
It would not be wrong to say that the 70s and 80s era belonged to Prakash Mehra. He not only gave blockbusters, but those movies that remain bookmarks of our cinematic memory.


Mehra is known for inventing Big B's USP… his intensity. The characters played by Bachchan in Muqaddar Ka Sikander (a tongue-tied, spurned lover), Laawaris (an illegitimate child) and Sharaabi (an unloved millionaire) all have something seething within. That's what makes them stand out from the run-of-the-mill Big B hits of the time. They have something that endures.


His protagonists were never one dimensional. Each film had at least one rip-roaring comic scene. Big B's cross-dressing act in Mere angne mein (Laawaris) or his marathon Pag ghunghroo in (Namak Halaal). His stand-up comic act in 'when Vijay Merchant and Vijay Hazare were at the crease' followed by his 'Wasim Bari and Wasim Raja were at the crease' in the same film. Or, his 'Moochein hon to Nathulaal jaisi' dialogue in Sharaabi. His drunken scene with character actor Ram Sethi – Tum chalo, main aata hoon – in Muqaddar ka Sikander is a scream.


A simple man, Mehra is not only credited for his amazing writing and screenplay, he was also a lyricist and had a fine ear for music. Most of his films had great music. Zanjeer's Yaari hai imaan mera (singer: Manna Dey, music: Kalyanji-Anandji) topped the Binaca Charts in 1973; so did Muqaddar Ka Sikander's O saathi re (singer: Kishore Kumar, music: Kalyanji-Anandji, 1978). Pag ghoongroo was a great disco favourite and the superhit track of 1982.


Even his first film as a director, Haseena Maan Jayegi (Shashi Kapoor, Babita, 1968) had some fabulous romantic tracks including the classic, Bekhudi mein sanam and Chale they saath milke.


His other films include - dacoit dramas: Mela (Sanjay, Feroz Khan and Mumtaz) and Samadhi (Dharmendra, Jaya Bhaduri and Asha Parekh). The latter had the track, Bangle ke peeche teri beri ke neeche, which GenNow can identify with for its remixed version. And there was Haath Ki Safai (Randhir Kapoor, Vinod Khanna and Hema Malini, 1974) with the superhit song, Peene walon ko peene ka bahana chahiye.  All these films fared reasonably well at the cash counters.


By the late 1980s, just like his main actor, Mehra seemed to have lost his touch. His last movie with Bachchan, Jaadugar bombed in the box-office, and as he had promised AB, he did not make another movie with him. In the 90s he made movies like Zindagi ka Juaa with Anil Kapoor and Madhuri Dixit in '92 and Bal Brahmachari which launched Rajkumar's son, Puru, but these didn't do well in the box office.


But still he will be remembered. His better films always had something extra, something special. The movies got over in three hours but there was a part of it one always took home.


May God Bless His Soul.


What does today's audience think about Prakash Mehra's movies?