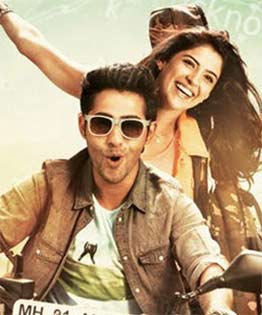 Armaan Jain, who has teamed up with Deeksha Seth in his debut film "Lekar Hum Deewana Dil", says he was very nervous working with his co-star because of her experience of "seven films".

"Initially, I was under a lot of pressure about Deeksha having done seven films. I was nervous about how I was doing? Whether I was good or not? How would I do a certain thing? So, I was breaking my head about everything. So I was very nervous," the 23-year-old said here Monday in an interview.

However, workshops and his experience as assistant director helped him sail through.

"But with time, I shared my assistant experience with her, she shared her acting experience. Acting is reacting and as the friendship between us grew, it became very easy. We were on the same page, had common goals, and had done a workshop in Goa. So it slowly became a lot of fun," said the grandson of legendary Raj Kapoor.

Deeksha, a finalist in the 2009 Femina Miss India contest, has so far featured in Tamil and Telugu films, while Armaan assisted Karan Johar on "My Name Is Khan" and "Student of the Year" and Shakun Batra on "Ek Main Aur Ekk Tu."

Meanwhile, Armaan's aspires for appreciation for his work more than the female attention.

"More than a following or attention, it is always good when people appreciate your work. It motivates you. So I hope that happens," Armaan said.