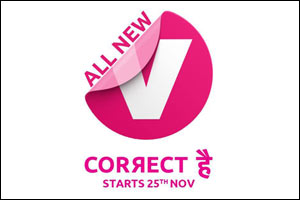 Channel V will flaunt a new brand identity and will see the launch of four new eclectic shows. The idea is to meet the need of the hour for Indian television - variety, says the youth general entertainment channel's head Prem Kamath.

The change is a "natural process", said Kamath.

"There certainly needs to be a change. On Indian television, there are too many options, but there's not enough variety, especially in the youth space," he added.

Now, starting on November 25, it will sport a refreshed identity - a new logo to go with its new tagline- 'V Correct Hai'.

"The tagline is representative of how the youth likes to be emotionally correct about everything? How they get to know within them about the right way to go forward?" explained Kamath.

The brand refresh will also see the launch of four new shows - 'Sadda Haq', 'Confessions of an Indian Teenager', 'Paanch - Don't Get Mad, Get Even' and 'Relationship Status-It's Complicated'.

Each different from the other.

'Sadda Haq' is about a young Delhi girl who challenges the patriarchal world to make her way to an engineering college while "Confessions of an Indian Teenager" is about a young boy who takes the viewers on a journey to meet teenagers and share their dilemmas that result from peer pressure.

'Paanch - Don't get Mad, Get Even' narrates the story of a shy 18-year-old girl who enters a college in Mumbai to 'right some wrongs'.

'Relationship Status-It's Complicated' is a sitcom about three boys and three girls who land into each other's life when they become next door neighbors.

Explaining the idea behind the shows, Kamath said: "We try to explore relationships, career, education, friends and other such issues surrounding the youth, through our shows."

Most of the shows are bi-weeklies and will last only around 26 weeks as short, season-based entertainers seem to be the flavor of the season.

KiranSonu1 6 years ago Sadda Haq is an awesome show...
All d actors of d show r awesome..
Love it.

-.QTPie.- 6 years ago Sadda Haq ROCKSS!!!
The concept is good and I love the actor and actress here :D

-bLEu98- 6 years ago Loving the whole new set of shows and the bi-weekly format.

iheartVD 6 years ago Prem Kamath , Take My Middle Finger Salute for ending TaaRey! I will pray sincerely that this Channel rots in hell! Spineless Peeps!

Karan_TaaRey 6 years ago Channel V Incorrect h :/
They Broke Millions Of Hearts !!! nd they r saying that they r correct ! Frm my side I HATE U..that u abruptlu Killed my TaaRey -,- !! But at ur place u r right :( U r giving love to million of Hearts By Re-uniting Kr :) So,all r happy !! Good..Go ahead nd Win Million of Hearts :)