View Profile
Divya Dutta, the very versatile actress is all set to make history as she gives a very powerful portrayal of a real story, about a Muslim woman who faces the tough challenges of life and is torn between her two husbands in 'Kahaani Gudiya Ki'..

Here is the actress in a serious conversation…

Q. Tell us something about the film?
A. Kahani Gudiya Ki, is a film based on a true story of a Muslim woman from Meerut whose husband has to go to the Kargil war after ten days of their marriage. When he does not return even after four years, the girl is married off for the second time and when she is eight months pregnant with her second husband's child, the first husband turns up. He demands his wife back.

Q. You were upset with the director of this fil 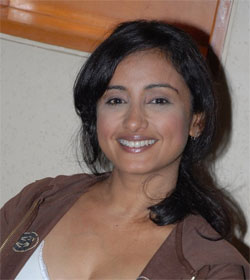 Featured Video
m, is it true?
A. I was a bit upset with Prabhakar Shukla because he did not allow me to do the dubbing. I really hold this against him because he stopped me from dubbing for a very beautiful scene and he knows my complaint too. But because the film is for a cause and tells a real tale about a girl who went thro' all the problems depicted, I was always with him and I am with him even now.

Q. How much are you satisfied with the final outcome of the film?
A. I have not seen the film, I have only seen the promos of it and I am happy with it.

Q. What do you have to say about the protests that are going against this film?
A. See I think these issues happen and then it stops after a time. So as an actor I have nothing to say regarding this. I only want to say that the film is coming, it should get released and people should watch this film.

Q. How did you feel when Prabhakar Shukla approached you with the script of the film?
A. By looking at the script, you can't say what kind of script it is because it is a real story, it's sad; it's melodramatic, confusing and real, so as a story if it is a script, I would say it was a brilliant script

Q. Is it true that the script underwent some changes after Gudiya died?
A. Prabhakar ji kept changing the script as per what happened while making the film till the time she died, he kept it close to reality. The panchayat shot was not taken at the time when the script was ready; it was shot after it took place so that we could shoot after the panchyat takes its decision.

Q. Any realistic character you are playing or would like to play?
A. Realistic character (laughs) probably an actor may be a Meena Kumari. I am doing a role one close to reality on the happenings of Shivani Bhatnagar's life, but I don't think it is a complete real story. I am enjoying playing such roles as an actor. I think similarities do happen but right now realistic stories rarely come.

Q. As an actor, what do you enjoy playing the most?
A. I like playing everything, be it serious or comedy roles. I guess as an actor, it is important that a balance between the two is kept. I am happy because I am not stuck up with the same image. I am working with Aditya Chopra, Subhash Ghai, Rituporna Ghosh and others and all are treating me in a different way. It is fun to be rediscovering yourself with different roles.

Q. How much of the burden of the film have you taken on your shoulder?
A. (Laughs) I have not taken any burden, it's only they who are giving me the burden. See it's just titled Gudiya I can't do anything with it beside that it is a beautiful role, a true story and I have tried to play it in a good way. And after this, if they say that it is on my shoulder, then I would not disagree with it because a film is always seen in totality. I have done my work sincerely and that's all I have to say regarding this.

Q. How is the music in the film?
A. I have always been a big fan of Jagjit Singh and I always like his songs and the style of composing.

Q. What other projects you are working on?
A. You will see me in twelve films this year where I have so many different roles to play, out of which seven films are comedy. A comedy film like a Vinay Pathak type comedy is there, and then Rajpal Yadav type comedy. I am also doing a children's' film, a Subhash Ghai film, but there are a lot of serious roles, lots of bold roles for me, a period film, then there is Dilli 6.