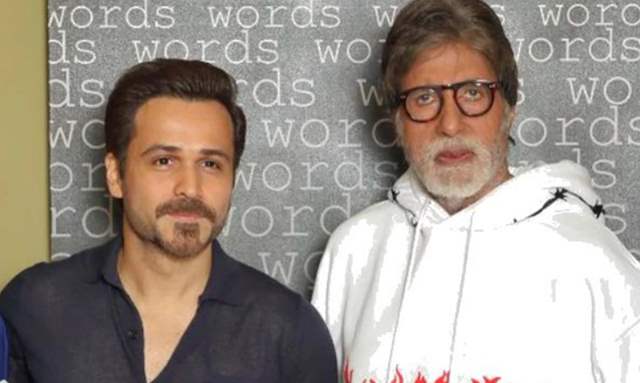 Amitabh Bachchan and Emraan Hashmi are set to star together in a psychological thriller, titled Chehre, produced by Anand Pandit and directed by Rumi Jaffrey. The film previously starred Kriti Kharbanda as the female lead, who later quit the film.

The Internet was flooded with the reason behind Kriti’s exit to be her starry tantrums and professional behavior, however, that stands untrue. As per recent reports, she refused to do intimate scenes, kiss and smooch an actor, which led to arguments between her and the makers of the film. The lookout for the new face as the leading lady is still on.

This is the first time Emraan will be working with Senior Bachchan and talking about his experience, he stated, “Working with Bachchan sir was fantastic. We did a 35 day-schedule and now he is coming to shoot in Poland in minus 10 degrees. I asked him the other day, ‘Why don’t you just chill, because you’ve proved everything that anyone would hope to prove?”

Also Read: Emraan Hashmi: It is Psychologically Disturbing; Recalls the Tough Time when his Son Battled Cancer at Four

Praising Amitabh Bachchan for his determination towards his work, Emraan told PTI “Acting drives him, makes him get up early in the morning and give his all. The day it stops giving me that drive, I’ll stop too. It’s commendable that at this age, he is so driven. He rehearses on sets, he is always present, completely engaged in the material.”

Besides, he also opened up about being stereotyped amongst the audience. “That’s the thing. People assume the worst from me all the time. Either I’m in a gangster flick or doing some horrendous act like murder or felony. That’s the zone. I can’t play a well-adjusted guy. I’m hoping one day I do that. But then you need a very strong script to give it a spin,” says the actor.

Meanwhile, after Kriti quit the Emraan-Amitabh starrer Chehre, Ankita Lokhande, Mouni Roy and Elnaaz Nourouzi have been in talks to replace the actress.

"Rhea Is Not Co-Operating With ED; Actor Claims She 'Doesn't ...
4 minutes ago

Revealed: Disha Salian's Sequence of Events On The Night Of ...
35 minutes ago

Meet The Returning Girl in Vansh's Life in 'Ishq Mein ...
48 minutes ago