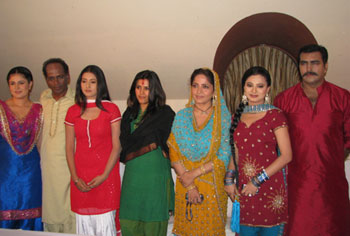 Featured Video
Kis Desh Mein Hai Meraa Dil is a story of promises and an immortal love that transcends all boundaries. It is set against a traditional Punjabi family backdrop. It is the story of two friends Balraaj Maan and Lalit Juneja who live in Ambala and the promise they make to each other, the promise that will decide the destiny of their children, Heer and Prem.

Commenting on the launch of the new show, Anupama Mandloi, Senior Creative Director, Star Plus, says, “Kis Desh Mein Hai Meraa Dil is replacing Kasauti Zindagi Kay which has been a huge success on the channel and it is only apt that a beautifully crafted, passionate love story about an eternal, pre-destined love should take its place. The show is bound to enthrall women of all ages with its colourful characters, its rustic feel and the story of a young man and woman whose journey of love has been decided even before they came into existence. We are very excited with this new offering for the viewers and are confident that they will enjoy this fresh saga of love.”

Ekta Kapoor, Creative Director, Balaji Telefilms, further adds, “I would only love to describe this as an ethereal story from the heart. This show is bound to ignite the magic of love and romance on television once again. I hope that the audience enjoys watching the show, as much as I enjoyed making it.”

The show has an impressive star cast consisting of Virendra Saxena, Deepak Quazir, Tasneem Shaikh and Sadhana Singh. The role of Heer will be played by new comer Additi Gupta.

11 years ago Additi we miss our cutie pie Heer and cute Pihu +her attitude :((((( love you so much! You are an amazing star and an amazingly talented actress!!
We want to see you rock in TV again !!!!!!

Wishing you all the best Additi...keep smiling!

+ 4
11 years ago Congrats on your comeback...wishing you all the best on this new project!

+ 3
11 years ago Love you Additi
Miss Heer a lot
You rock in Sangini :D

11 years ago All the best
Keep smiling Additi :)

+ 2
14 years ago hmm.
all the best to this show
but what this maens
this show will set romance back again in television
people dont forget dmg ke armann riddhima most romantic jodi ever i hav seen on small screen
anyways no prob to ekta's show they r creative in thier own way

14 years ago oh no one more k- serial....again lovers will not unite