After Chandraprakash Dwivedi, it is now time for Ekta Kapoor to come up with her Mahabharat. After continued denials, the confirmed news now is that the ‘Queen of Soaps’ has finally decided to tread into the path of mythologicals for the first time in her illustrious career. But along with the news is coupled a lot of confusion regarding the casting of the show, which is to start from August 15th. 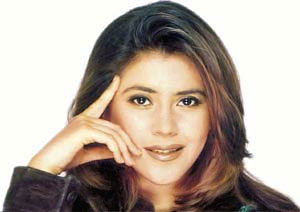 Featured Video
While the cream of Ekta’s loyalists like Ronit Roy, Hiten Tejwani, Gauri Pradhan, Chetan Hansraj, Akashdeep Saigal, Gauri Pradhan, Sakshi Tanwar have been in the spotlight as the probable cast, none of the actors have confirmed their association with the project.

However, when we spoke to Parvati aka Sakshi Tanwar of Kahaani Ghar Ghar Ki, she refused to comment saying, “I was approached by Balaji in January, but since then I have not got any further intimation on the same”.

As regards to fixing Independence Day as the launch date, the source says that Ekta did not want competition with Shahrukh Khan’s ‘Kya Aap Paanchvi Pass Se Tez Hai?’ and hence chose the month of August, as King Khan’s unique game show would have ended then. Incidentally, Star Plus is gearing up to air ‘Kya Aap Paanchvi Pass…’ from 25th April at the 8 pm weekend slot. News is also abuzz that the shooting for Ekta’s Mahabharat is already in full swing at Chandivili Studio.

Keep watching this space for more on Ekta’s Mahabharat on 9X..

14 years ago Gauri's acting in kutumb 1 and 2 was fabulous.....In fact no other actress on tv or even in bollywood/hollywood impresses me other than Gauri in terms of acting....but I seriously do hope Ekta keeps the mahabharat storyline intact and doesn't add her own masala to it!

14 years ago that gauri female cant act! draupadi! yeah rite! sure! go ahead! all the best!

14 years ago ewwww ewww ewww....most nauseating news I have heard in recent times!

+ 2
14 years ago Hiten and Gauri should be cast as Arjun and Draupadi or maybe Eijaz and Anita!!!


Akashdeep Saigal will be good for Duryodhan!!!

+ 4
14 years ago oh!! please nobody wants ekta to try her stint at mythology,she wud create a big mess out of the great indian mythology ,ekta stop making mahabhrath ,plzzzzzzzzzzzzz

14 years ago Atleast the generation will know WHAT IS MAHABHARAT!!!