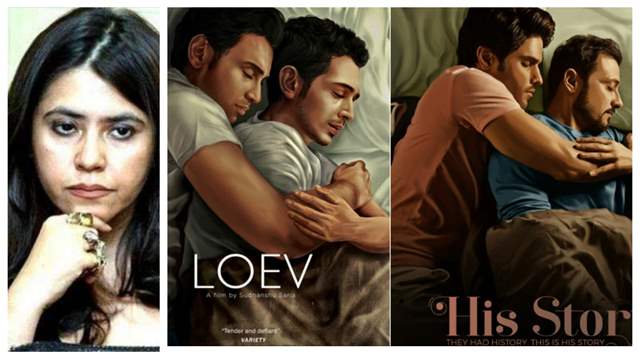 Ekta Kapoor's upcoming web show His Story on Alt Balaji finds itself in deep trouble right now. The poster of the show along with a teaser was released only yesterday and ever since that happened, it invited instant controversy. Not because of its subject matter though but because of something entirely different - plagiarism.

After its release, it was called out for plagiarism for allegedly copying the design of the poster from Loev that released in 2015.

Jahan Bakshi, who is an art director and film marketing strategist took to his Twitter and slammed ALTBalaji for it. “Bro @altbalaji are you okay? I mean if you need someone to design posters I can help you, I promise it doesn’t cost that much.” In another tweet, he wrote, “This poster for LOEV was designed by @TalkPigeonCo and illustrated by Rohan Pore. We spent months on it. Investing solid time/money on a poster for an indie film is difficult. And yet, a studio which surely has the resources to commission original designs opts to steal it. Sad.” Bakshi shared both the posters and surprisingly both look the same-

LOEV director Sudhanshu Saria also lashed out at the makers of His Story and tweeted that “this culture must end”.-

Neither Alt Balaji not Ekta Kapoor have responded to the same yet but apparently the poster has been taken down.

1 months ago I like how these days we are getting OTT platform LGBT shows. Even Bollywood movies with gay protagonists. My ultimate dream is to get a mainstream Hindi serial, with a lesbian or gay protagonist. Their orthodox family forces them to marry someone of the opposite sex, but on the mandap they reveal that they’re gay. Then they are disowned by the family and their struggle to lead life and meet their lover against all odds forms the crux of the story. I even have a title in mind : “EK PREM KAHANI AISI BHI”. I want it on ⭐️ Plus as it’s my favourite, most popular and a premium quality genuine Hindi GEC.

1 months ago When is India going to drag Ekta to court, SHE IS RUINING THE SOCIETY wake up people before it's tooo late!!! Ekta and Altbalaji are disgusting .

1 months ago Ekta is a plagiarist!!! That’s a shocker!!! Nothing is original when it comes to her. I hope someone takes them to court. Bunch of losers

+ 2
1 months ago Even if i yell 'Shame On AltBalaji' it will be an insult to the word because these weirdos are born to be atricious ! What a bunch of loosers !!!