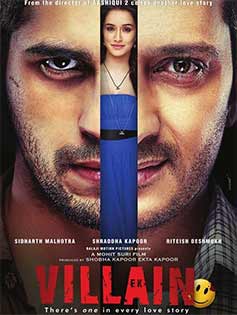 Celebrities like Karan Johar, Alia Bhatt and Parineeti Chopra have praised Sidharth Malhotra's forthcoming film "Ek Villain" and have predicted it will be one of the year's biggest hits.

"I was lucky to see Mohit Suri's face first after the film ended and he is the biggest star of the film. I hugged and told him that you have made an outstanding film," the 42-year-old said here.

The film, which also features Riteish Deshmukh and Shraddha Kapoor, has been produced by Ekta Kapoor under the banner of her production house Balaji Motion Pictures and Karan feels that it is going to be its biggest hit ever.

"There are very few films that have romance, action, thrill and the most important of all there is a solid emotion in the film which makes you cry. At times your heart even cries for the negative character. It is so brilliant. I think this is going to be Balaji films' biggest hit," added Karan.

"It is an outsanding film and I just told Mohit that I think it is going to be a bigger hit than 'Aashiqui 2'. Riteish, Sidharth, Shraddha are amazing," said Alia.

"I loved it. I was here for Sidharth and Shraddha. But Riteish and all of them were so good. I know this film is going to be a big hit," said Parineeti.

"Ek Villain", that is set to release Friday, also stars Aamna Sharif and features an item song by Prachi Desai.