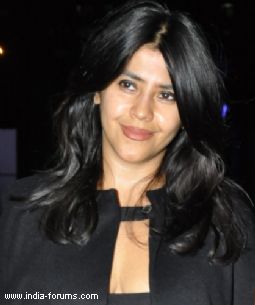 Producer Ekta Kapoor says her forthcoming supernatural thriller "Ek Thi Daayan" is not a docu-drama and that such reports should not be taken seriously.

"These are not facts. It's not a docu-drama. It should not be taken seriously," she said at the "Daayan" book launch here Wednesday.

The film's co-producer Vishal Bharadwaj, who was also present for the event, agreed with Ekta.

"I don't believe in all this. I take all this as an entertainment. Let's have fun with this," he said.

Written by Ved Prakash Sharma, the novel "Daayan" does not follow the same story as the movie "Ek Thi Daayan".

"Everyone needs to read Ved Prakash's books. He always had fans. He never ventured into supernatural. I thought this would be a good platform for the book and the film," said Ekta.

Bhardwaj too was all praises for the writer and said he was happy to share the stage with "a big writer" like him.