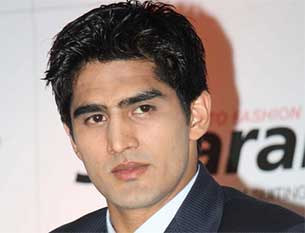 Boxing remains his first love, but Vijender Singh is determined to give his best shot to acting also as he debuts with Bollywood film "Fugly". However, he says that while good actors are aplenty, good boxers are not so easy to find.

After an "incredible" experience of shooting the film, he says he has emerged as a more confident actor. From boxing to Bollywood, the Olympics bronze medallist spoke about his journey in an interview.

Q. Would your boxing fans be happy with your move into movies?

A. Why not? I am trying something new. It's not as if I am moving into something dubious or wrong. I am doing a film. That's a big thing. And my boxing fans would be happy to see me on screen. If Bollywood was not a desirable place, would there be so many hopefuls every year? I am going to try my best.

Q. Would you be giving equal attention to both your careers now?

Q. How was the experience of working in your first film?

A. It was an incredible experience. My director Kabir Sadanand too is a sportsperson. He is a bit of a cricketer. We had a great time shooting.

Q. How difficult was it for you to get a hang of the acting?

A. I've to admit that initially it was tough for me to act. But once I got a hang of it, it was fine. Now I know how to respond to the camera, where to turn and where to let the light fall on my face. We had a technical team on the sets of "Fugly". They were very helpful. I used to be the first to reach the sets, and I listened to the instructions very carefully. Somewhere, my efforts are bound to show up on screen.

Q. You've won the highest awards for boxing. What do you hope to achieve as an actor?

A. Though boxing is my first and primary career, I am going to give acting my best shot. I am not into this just to while away my time. I hope I'll get as much recognition for acting as I've done for boxing. And like I said, my passion for boxing remains the same. I am already preparing for the Asian Games. I am mainly stationed in Delhi. But I keep travelling to Mumbai. I feel very comfortable in Mumbai also.

Q. Do you feel welcome in the film industry?

A. Ji, bilkul (Yes, absolutely). In my very first film I've Salman Khan and Akshay Kumar dancing with me. What more could I want? My debut film "Fugly" will entertain you.

A. When I got my work permit as an actor, I felt very proud. So far, my resume showed my profession as only a boxer. When I got a card declaring, 'Vijender Singh Cine-artiste', I felt very happy. I was like, 'Wow, this is a new beginning for me.' I feel happy that I am making a new start even when I'm doing well as a boxer.

Q. So which one turns you on more, the acting or the boxing?

A. Bhaiyya, achche actors toh bahot mil jayenge, lekin achche boxers milna utna asaan nahin (It's easy to find good actors, but not good boxers). But at the moment I am waiting for the release of "Fugly".