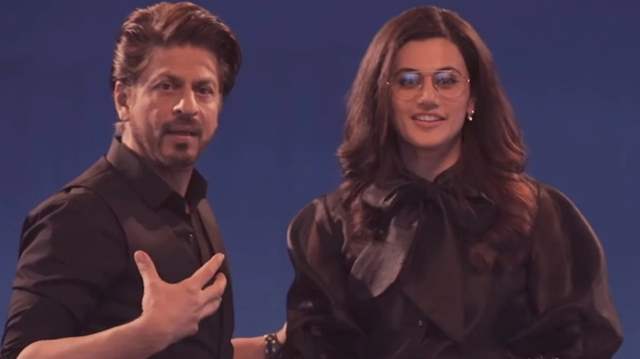 Since Rajkumar Hirani had announced his collaboration with Shah Rukh Khan for Dunki, fans had gone bananas. They have been awaiting even the smallest of details regarding the film which pops up on the web.

Dunki will be the first time Shah Rukh Khan and Tappsee Pannu will share the screen space. Now, a slew of pictures of SRK and Taapsee from London have been leaked online which showcases their first glimpse from the film.

The newly leaked photo shows Shah Rukh Khan and Taapsee Pannu strolling through the streets of London. SRK is on one knee with a puzzled expression on his face. He's got a bag in his hands. Taapsee, on the other hand, shows a huge smile while carrying a bag on her shoulder. The two appear to be embarking on a trip together.

Shah Rukh Khan, Taapsee Pannu, and director Rajkumar Hirani were reported to be travelling to London and Europe for a filming schedule. According to reports, Dunki is about a Punjabi boy who immigrates to Canada. The theme of this film is stated to be cross-border immigration. On December 22, 2023, the film will be released in theatres. Gauri Khan, Shahrukh's wife, is also involved in the production of this film.

Aside from Dunki, Shah Rukh has two additional films in the works. Pathaan, his comeback project with Deepika Padukone and John Abraham, and Atlee's Jawan with Nayanthara are among them. While Pathaan is slated to hit the screens on 25th January 2023, Jawan and Dunki will be released in the end of 2023.