New Delhi, Sep 13 (IANS) The much awaited film 'Drona' will possibly give Bollywood its most expensive villain ever in the form of actor Kay Kay Menon. Nearly Rs.220 million has been spent on his character, Ritz!

The cost included the villain's castle, special effects, his troops, his costumes and other props.

'Ritz is an ambitious characterisation. Apart from the external 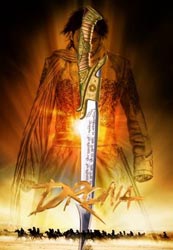 Featured Video
opulence, there are a lot of subtle nuances that we have worked upon,' Director Goldie Behl said in a statement.

'Generally, a villain is not so much worked upon but in 'Drona', Ritz is a mighty character. He is grand and guileful, and to construct this character on screen has cost us a proper fortune,' he added.

Before 'Drona', Bollywood's most expensive villains were Shakaal from the 1980 film 'Shaan' and Mogambo from 'Mr.India' that was a hit in 1987. They were also expensive villains due to their unique look and the set-up of their respective dens.

'Drona', set for an Oct 2 release, narrates the story of a man who is forced to face his fears and become the hero he was born to become to protect the universe and mankind. Abhishek Bachchan essays the lead role and Priyanka Chopra also shares screen space with him.

Kay Kay or Ritz's den was created in Prague, the capital of the Czech Republic and one of the most expensive cities in the world. A huge castle was hired there to make it the empire of the villain.

Top-notch special effects have been used in the film to make the look extraordinary. The exteriors of the castle have references to the popular Bikaner Fort that have been recreated with the help of special effects.

The interiors of the castle are in the shape of a well and the look was recreated in Mumbai's Film City with the help of 100 workers for over two weeks.

Also, 200 people were hired to play Ritz's troops and they shot for two months in Prague.

According to Kay Kay, playing Ritz was a fascinating journey for him.

'It was not just a character but a universe in its own. He is magical and mysterious. It was very difficult in the first place to get into the world of this character and equally difficult to come out of it,' Kay Kay said.