View Profile
Before making her debut in film Humse Hai Jahan, Vishakha Singh, the leading lady, has done a lot of commercials for famous brands like Sunsilk Shampoo, Medimix Soap, Dabur Vatika etc. Let’s see what this budding actress has to say about her experience working in Humse Hai Jahan.

Q. How was your experience working alongside Mashhoor Amrohi rather than Shah Rukh Khan?
A. See, as a newcomer, working alongside Shah Rukh Khan is like a dream. But unfortunately the role, which I auditioned for in Chak De India, went to Vidya Malvade. It was nice working with Mashhoor, who’s a very talented actor. Looking at him, one should easily realize that acting is in his blood. At a mere age of 26, without any previous experience, Mashhoor has done a wonderful job. Just imagine the growth he shall have after 10 years and plenty of experience enriching his talent. I wouldn’t be surprise if he does a film like Pakeezah after 10 years.

Q. Your first film is released under the famous banner of Kamal Amrohi. How do you feel?
A. I am lucky to be associated with such a banner. I am happy that I have been projected the same way by Amrohi Production as they are known to project their past actresses. If you visit Kamal Amrohi’s office, you would find posters of Meena Kumari and Hema Malini hung on the walls. I hope that in the future, even my photograph will be framed beside these great actresses. 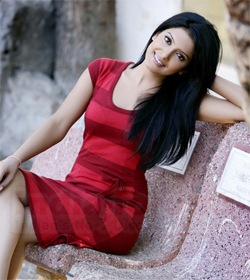 
Q. What’s your expectation with this film?
A. I haven’t kept any expectations. Film has been made well and I want people to come and watch it. Beside it’s releasing against a big film like Sarkar Raj, I only wish that people see me in the film and give me the chance for further improvement.

Q. Any interesting incident which you can recall happening on the sets?
A. There were many interesting incidents that happened on the sets but I would always remember one of those. There was one scene where Mashhoor picks me up on his shoulder. While filming it, I got four injuries as I banged my head and legs a few times with the door. This scene refreshed my mind making me remind of Vikram-Betal. Even we have talked about the duo in our film.

Q. We have heard that the film was previously titled Hum Lakh Chhupaye Pyaar Magar. Why was it changed?
A. The fact is that people were feeling that the title of the film was very big. Once when Salman Khan visited our sets he, too, told Mashhoor the same.

Q. Tell us about your other film Coffee Shop…
A. In this film, I am playing the character of a struggling painter who hasn’t taken any professional training in painting. But then, too, her ambitions are big. She wants to go abroad to learn fine arts. Girish Karnad and Lilette Dubey help her to fulfill her dreams. Saurabh Shukla is also working in this film.

Q. All the names, which you have mentioned, have strong theatrical experience. How was you experience working with them?
A. It was a wonderful experience. I learnt a lot from them. Being a new comer, my dialogue delivery was very fast, but they had a very good control on their voice. Apart from dialogue delivery, I also learnt a lot about improvisation in acting. Maximum of my scenes were filmed with Saurabh Shukla. Being a director, Saurabh helped me a lot to grow as an actor. After working with him, I felt as if I have found a completely new Vishakha hidden in me who can do anything. Liletteji narrated lots of stories associated with Baghban. From these stories I learnt about how big actors respect time and utilize it in a right way. I would definitely try to improve my acting skills with every film I do.

Q. Apart from these films, any other projects you have signed?
A. No, I haven’t yet signed any other film. There’s a film named Do Aur Do Paanch, which I signed in 2005. We finished shooting for it in 2006, but I don’t know for which reasons its releasing date went on postponing. Luckily, even this film is getting released in coming December. Salman Khan is playing the lead in this movie. My film Coffee Shop is due to get released in August, this year. If all goes well, then I shall have three releases this year.

Q. Apart from Hindi films, you have also worked in south. Is there anything to share with us?
A. Yes, I have done two South Indian films. Last year I completed a Telugu movie Gnapakam and this year I have worked in a Tamil film Pidichirruku. My Tamil film was a mega-hit. In Gnapakam, Venkat was my co-star while in Pidichirruku, Ashok worked opposite to me. I did this film just to fill my time as I had a lot of gaps while shooting for Humse Hai Jahan.

Q. Which is of most importance to you – Hindi Cinema or the South Indian flicks?
A. It’s understandable that if one gets good films in his/hers own language then why would one go for regional cinemas. If in South, I get a good film and a good character then I would surely work in it, but as far as giving importance is concerned, it would always be Hindi cinema.