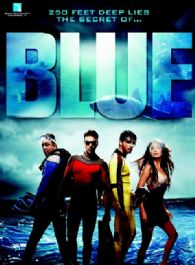 The cast & crew of 'Blue' experienced a 'wave' of sadness once the shoot of the film got over in the Bahamas. So in order to beat the 'blues', the crew decided to throw a beach party to celebrate the completion!


And that's not all, it so happened that Zayed's birthday also fell on the same day which gave everyone a chance for a double celebration! The actor was also overjoyed to be able to spend his special day along with the cast & crew who had become family to him by the end of the shoot.