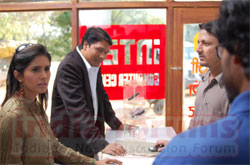 The man who shot 'Satya' has almost completed his first movie as director, 'Mohan Das'. Cinematographer Mazhar Kamran's film is about a man lost in his own country, a satire on the common man.

Mazhar, who was earlier associated with films like 'Kaun' and 'Jhankar Beats', as cinematographer, is a graduate from IIT Chennai, and FTII, Pune. We hope his directorial debut is as awe-inspiring as his debut as a cinematographer, 'Satya'.