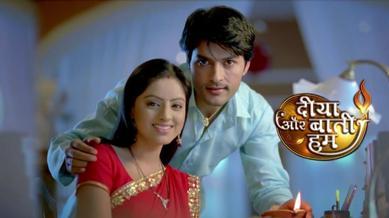 Diya Aur Baati Hum, about a girl's grit and gumption to become an IPS officer, has turned out to be the most inspiring fictional story on Hindi general entertainment channels, according to a survey.

Conducted by online matrimony portal Shaadi.com, the survey was undertaken to understand the influence of TV shows on Indian women.

When they were asked about the soaps they believed empowered women, Diya Aur Baati Hum topped the chart with 47.8 percent votes, followed by 27.3 percent votes for Yeh Rishta Kya Kehlata Hai. Others opted for "Jodha Akbar", "Balika Vadhu" and "Qubool Hai" in order of preference, respectively.

The poll also revealed that 36.2 percent of the Indian women surveyed, consider Jodha-Jalal from Jodha Akbar as the 'Perfect TV jodi'.

This was closely followed by Kapil Sharma and Sumona Chakravarti from "Comedy Nights with Kapil" with 33.1 percent votes and Dhruv and Saachi from Kehta Hai Dil... Jee Le Zara with 30.7 percent votes.

The survey highlights how Indian women have embraced personalities of characters from their favourite TV shows as real people, Gourav Rakshit, COO, Shaadi.com, said in a statement.

The poll is part of the constant research that Shaadi.com does in its attempt to gauge the preferences of its members.

KHUSHIJ1987 6 years ago Jodha akbar is bestest akdha rocks together

Plusq8 6 years ago Saachi from Kehta Hai Dil... Jee Le Zara was very realistic and one of the best portrayals of today's Indian woman - constantly multitasking (a working professional and home maker). Dhruv and Saachi's relation makes us think beyond the stereo typical definition of love and marriage. Ruslaan and Sangita performed amazingly well as Dhruv and Saachi. It was a very inspiring show indeed.

naina2010 6 years ago DABH is the most inspirational show in all the shows. This show never showed which is disturbing to the viewers. Always concentrated on the main plot , and never showed anything disheartening so far. I can say this show has been continuously inspiring everyone in the family and best and popular show. I wish it continues to inspire all rural and urban audiences.

MrDarcyfan 6 years ago Interesting that the Dhurv and Sanchi couple were among the top 3. That means the couple consisting of an older girl and a younger guy is popular among the viewers! That is really very good. That means people embrace diversity and not always the same old cookie cutter thing!!

I don't watch DABH but I think the story of how a girl fights for her dream and how her husband supports her is worthy of praise. It takes a truly secure man to not be threatened by a women's success. It is not just an "Eastern disease". I live in the west and have done most of my life. Even here, men would struggle with having a wife more successful than them. So in that sense Suraj is a VERY secure man. He knows who he is and he is fine with it. So he has NO issues with his wife being whatever she wishes to be!! Truly an exceptional message!! My hats off to the makers!!

poiu123 6 years ago Its nice that the no 1 show in India is showing a woman having a serious career post marriage.
Women empowerment indeed DABH.