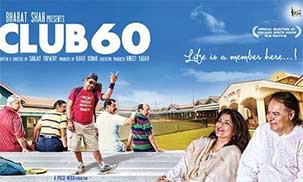 Filmmaker Sanjay Tripathi is happy that his directorial debut "Club 60" has got a positive response and that word of mouth is helping the film in getting more viewership.

Tripathi told IANS: "Yes, I am extremely happy that such a small film is standing on word of mouth. People are watching the film and they are happy with the content. I was not sure how the film will do commercially, we just had 200 screens. But it's great that the response has been outstanding."

According to a film critic, a story of aging and despair dappled by dashes of warmth and humour, "Club 60" is a treasure house of veteran actors at their luminous best lending to the film a kind of emphatic excellence.

Tripathi wrapped up the film in just Rs.5.5 crore and hopes the makers recover the cost.

"It is a very small budget film. We made the film on a budget of Rs.5.5 crore and we are hoping to recover the cost. The response has been encouraging, so I feel we will do well," he said.