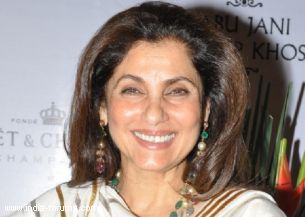 Veteran actress Dimple Kapadia, who plays the lead role in "What The Fish", was set to do a promotional song of the upcoming film with a focus on the younger cast members. But even though she couldn't reach in time for its shooting, she didn't let the work stop.

Director Gurmeet Singh is all praise for her practical approach.

"Dimpleji has been very enthusiastic and supportive for 'What The Fish' since the beginning of the project. In fact, we had even ideated for a promotional video together. But due to unforeseen circumstances, we had to go ahead without Dimpleji. She insisted we shoot the music video, even in her absence," Singh said in a statement.

The song, titled "Suraj asth Bambai mast", is being shot in Madh Island bear here and features the other cast members, including Sumit Suri, Manjot Singh and Anand Tiwari.

It is clear that Dimple, 56, understands the need to promote the movie via the younger generation.

As the cast and crew was busy wrapping up the video in Mumbai, Dimple was to fly back from Goa especially to shoot for the video when a flight schedule mishap led her to miss the shoot.

The story of "What The Fish" revolves around the protagonist who has to leave town and needs someone to take care of her money plant and fish. She then decides to leave the house in the care of her niece. The narrative is about the hilarious turn of events which take place in the house in her absence.

Dimple will be seen in an elegant sari-clad avatar in the movie, which releases Dec 13.