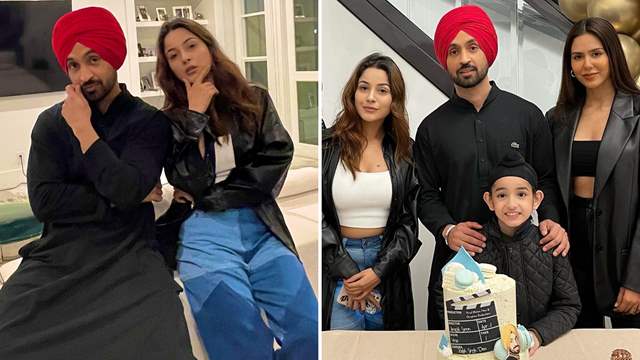 The power duo, Diljit Dosanjh and Shehnaaz Gill have successfully completed the shooting of their Punjabi film Honsla Rakh. The team has wrapped up the shooting in Canada and dropped pictures from their celebrations.

Directed by Amarjit Singh Saron, the comedy film also stars Gippy Grewal’s son, Shinda Grewal and Sonam Bajwa in key roles. As the shooting came to an end, the entire star cast and crew partied in full spirit and even shared glimpses on social media.

Diljit shared pictures with Shehnaz as they wrap ‘Honsla Rakh.’ He can be seen dressed in a black kurta pyjama as he poses next to Shehnaz, who looked gorgeous in a white top and blue jeans paired with a black leather jacket.

Shehnaz too took to her Instagram handle to share a group picture with her team. Have a look:

Back in October, Diljit Dosanjh had revealed the first-look poster as well as the release date of Honsla Rakh on Twitter. He wrote, “This Dusshera #HonslaRakh, 15th Oct, 2021 (sic).”

The film is special for many reasons as it marks Diljit Dosanjh’s debut as a producer and it will also feature Shehnaz Gill, who became a nationwide sensation after her stint in the reality show Big Boss.