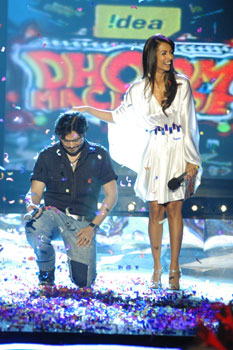 Recently on the sets of Idea Dhoom Macha De, the naughty Dhoom team played a spoof on the talented Babul Supriyo.The team shocked Babul by saying that he was a part of Danger Zone (this was before Jaspinder and Richa's names were announced). But later Supriyo was taken by surprise when he was announced the 'Dhoom Stopper of the Week'.

To add on to the tension, the Judges mocked Babul for his inappropriate / agitated behavior in the past when he was in the danger zone, but all was taken in good spirit. Finally Babul performed on 'Yeh Jo Mohabbat Hai' and with due permission from the Ad man Prasoon Joshi, changed one word from the song, 'Hum Toh Karenge Pyaar' (originally Hum Na Karenge Pyaar) which brought positive feeling and was apt for the occasion.

It was a great day for Richa Sharma, one of the contestants who performed on 'Mere Maulla Karam Ho Karam' as Shankar Mahadevan could not describe her performance in words; he literally gave her a standing ovation for her rare selection of song and also for singing it so extremely well. To grace the occasion, the special guests present were stunning Mahima Choudhary with Director Tanuja Chandra who were promoting their yet to be released film 'Hope and a Little Sugar'.