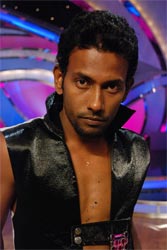 Dharmesh Yelande, the favourite of all in Zee TV's Dance India Dance Season 2 has always been at the receiving end when it came to understanding the English language.

It so happened that Geeta Kapoor, Dharmesh's Master put a strong word to her team mates that they should be conversing with Dharmesh only in English, so that he gets a hold on the language and even understands it better.

According to our source, "The lessons got did not make much difference for Dharmesh, as he was caught in a very embarrassing moment when he recently went to his home town, Baroda. He was mobbed by a group of educated people who would not allow him before he signed autographs. Dharmesh was left in a spot of bother as he did not know what to write. The channel representatives who were with Dharmesh then gave the guy an idea to escape, and asked him to write in a style a simple 'D' on their autograph books. Dharmesh willingly did that, and made his fans happy".

Well, this guy certainly knows how to impress his fans…

10 years ago Wow so the news was about what?

10 years ago why are there constantly articles about Darmesh.....?!?! I would like to read about the other contestants!

kulmona 10 years ago I would also like to read about other contestants.

And, yes, it's good to know English but not essential since Dharmesh lives in India where DID is set. He should have signed his name in his own language.

swatinandeshwar 10 years ago Hi Dharmesh, i am the gretest fan of you. i love u and ur dance behind ur imagination.i see your every performance every time. i miss u too much. i miss u with my each and every heartbeat. i love u too much.

10 years ago 40% people in india speak hindi and Dharmesh Sir is also one of them.
I totally don't agree with geeta to make her learn english.
A PERSON IS NOT JUDGED BY WHICH LANGUAGE HE/SHE SPEAKS BUT IS KNOWN BY HIS BEHAVIOUR AND HIS TALENT
and Dharmesh sir is an extremely talnted dancer.

+ 3
10 years ago he is stupid weirdo and him talking in english or not FREAKIN DOES NOT MATTER TO ANYONE!!!!

+ 3
10 years ago Tomorrow if Dharmesh sneezes or hurts his feet while dancing, TB people will write an article on that. Can we have articles on "lesser known contestants" as well?