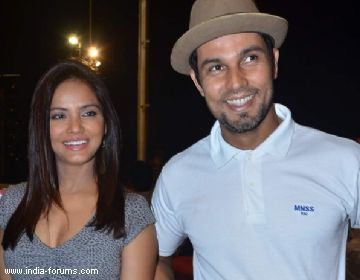 Actress Neetu Chandra was surrounded by rumours of her wedding to Randeep Hooda, but she is ready to strike back on screen, this time in a desi avatar of Uma Thurman's role in "Kill Bill".

The stunts would be on a par with what our Bollywood he-men do in action scenes, says producer Siddhartha Jain.

"Not like some actresses who did a few flips and somersaults and had everyone going wah-wah over their derring-do... Neetu will actually be performing all the stunts that are associated with the action genre," said Jain, who is working out the nitty-gritty of the series.

"She is as trained and equipped for the athletic stuff as Vidyut Jamwal who made such a terrific impact on 'Force'," added Jain.

Neetu, a certified blackbelt holder in martial arts, will perform all stunts in the movie herself. She feels it's time Bollywood gets its very own female action star.

"With due respect to my female colleagues like Deepika Padukone in 'Chandni Chowk To China' or Priyanka Chopra in 'Don', who have thrashed around their limbs in so-called action scenes, I don't think we've had a genuine female action star since (late) Fearless Nadia," said Neetu.

So the 27-year-old is ready to take on the action genre.

"I feel we're ready for some female action. I've trained in the martial arts for 11 years. So far none of my roles has been action-oriented. Of late I had begun to get very restless. There's a lot of pent-up energy within me," she added.

Her rumoured relationship with Hooda is said to have reached a dead end, and Neetu clarifies that marriage is far from her current list of agenda.

"I don't know where these rumours of marriage are coming from. It was only when a dear filmmaker friend recently asked if I'd like to do his film that I got to know there was a prevalent belief that I'm getting ready to quit.

"For the record I'm not getting married for another five years," she said.

Nawazuddin Siddiqui Waited 20 Years to Work with Sudhir ...
56 minutes ago