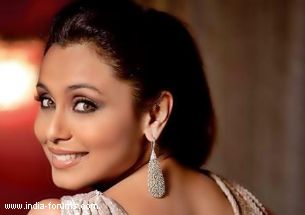 Rani Mukherjee has taken on effervescent roles in the past -- but for the forthcoming entertainer "Mardaani", where the recently married actress essays a police officer's role for the first time, she has shed frills and style to get under the character's skin.

The raw and gritty film, a distinct departure from Pradeep Sarkar's style of filmmaking, will hit the screens Aug 22.

In the newly launched poster, Rani sports a black kurta and has her hair tied loosely, and she holds up a revolver with the confidence of any action hero that tinsel town has ever seen.

Describing the film and Rani's character, a statement from YRF read: "Deft at picking up hidden clues and fearless in confronting hardened criminals, Shivani stumbles into the world of debauchery, cruel desires and exploitation and onto a case that will change her life forever."

The film's story takes an interesting curve when a teenage girl is kidnapped by the child trafficking mafia and smuggled outside the city. Shivani then embarks on a relentless hunt for the girl and what follows is a cat and mouse game between the fearless cop and a ruthless mafia kingpin.