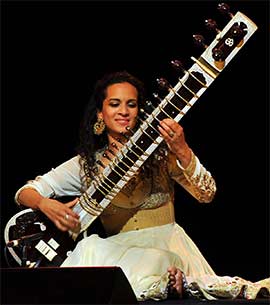 Sitarist Anoushka Shankar, who grew up playing the stringed instrument with her father, the late Indian sitar legend Ravi Shankar, in the city and across the globe, believes the music scene in the Indian capital has come a long way.

Anoushka presented her musical skills on the stage at the Siri Fort auditorium here with her late father when she had just entered her teen phase. She says there have been changes for good since then.

"Sometimes, they are willing to pay for tickets and support, which is a change. That wasn't the case earlier. I think the music scene has become a bit broader and evolved here over the years which is wonderful," Anoushka, 32, who will perform here at the Talkatora Stadium Dec 14, told IANS in an interview.

"I've always enjoyed playing in Delhi. It's my second home," added the wife of popular British director Joe Wright. She considers London as her first home.

Another growth she has noticed is in the non-film music sector.

"In non-film genres, there's been a growth in these years. With all these festivals like NH7 Weekender, new faces are introduced to the music scene," she said.

The musician, on a Mumbai-Delhi tour put together by Bliss Entertainment, says every city has a good audience.

"It depends on venues. In the same city, I can play for classical audience, young electronica, hippy, jazz audience. Each will be different from each other. In Delhi you've got classical crowd, young rock lovers, electronica or Bollywood lovers. Every city has a good audience," said Anoushka.

According to her, India in general should have more growth of space and opportunity for different genres.

"If you compare with London and other cities, they have more venues. You've got opera houses, concert halls, jazz bars, and nightclubs. There is room for everybody.

"The audience knows where to go and support different kinds of music. We (Indians) have less auditoriums and less places; so people compete with each other a bit more," she said.

"To make classical music compete with film music for the same airwaves doesn't make any sense. It will obviously not do well," she added.

However, she doesn't believe that there is any threat to classical music.

"People talk about how classical music is in danger. I don't think it's in danger. It has a strong audience, but it doesn't need to compete with something that's naturally going to be much bigger," said Anoushka, who is emotionally connected to her latest album "Traces Of You" much more than her previous six albums.

It took the Grammy nominee a year to put the album together and it is inspired by her personal experiences.

"The album was kind of a journey of life - there was a lot of love, pain, beauty, loss but also kind of hope. For instance, when my father passed away (Dec 11, 2012), I was also busy with my two-year old son. So, there was a lot of beauty, so the album had an amazing balance," said the musician.

Anoushka teamed up with half-sister and Grammy winner singer Norah Jones for the second time for "Traces Of You". The two had collaborated in 2007 for Anoushka's "Breathing Under Water" album.

She says working with Norah was her most meaningful experience.

"We worked for the second time, but it was a much more elaborate experience this time. She has sung three songs instead of one and there is personal content in the album; so it was sweet and lovely to work with her," said Anoushka.

Drew Barrymore Reunites With Ex-Husband After Not Speaking ...
36 minutes ago

Chris Rock Jokes About Shooting for 'SNL' Premiere From ...
3 hours ago

Karan Johar Breaks Silence: "I Do Not Consume Narcotics"; ...
3 hours ago

Kangana Slams Anushka for Raising her Voice Against ...
5 hours ago
View More
TOP