It's a dream come true for 14-year-old Rahul Kumar, who has got an opportunity to act with Bollywood stars Aamir Khan and Kareen Kapoor in a new movie.

Rahul, a Class 8 student here, has been offered a role in the movie 'Three Idiots' by 'Munnabhai' fame director Raj Kumar Hirani. 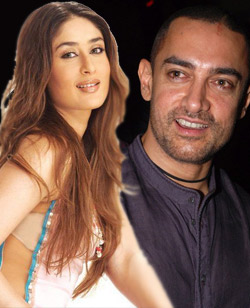 Featured Video
een offered a role with Aamir Khan. It was my long cherished dream that has come true,' an excited Rahul told IANS.

The movie is based on Chetan Bhagat's famous novel 'Five Point Someone' about three IIT students and the problems they face while studying in the institute.

As of now, Rahul has not been given details about the role he would play in the movie but has been asked to report for shooting in Bangalore and Goa.

The other actors in the movie, slated for release in September, include Sharman Joshi, R. Madhavan and Boman Irani.

This is not Rahul's first feature film. He also worked in Vishal Bharadwaj's 'Omkara' and 'The Blue Umbrella'. In 'Omkara', he played Saif Ali khan's son.

'It was really a good experience to work with Saif Ali Khan, Konkana Sen Sharma and Ajay Devgan,' he said.

However, it had not been a cakewalk for Rahul, son of a daily wage earner to learn acting before he got the support of Literacy India, an NGO that runs a drama school for poor children in Delhi's Palam Vihar.

'I was interested in acting from a very young age but the monetary problems in family stopped me from taking professional training,' Rahul said, adding: 'In 2000, I came to know about the drama school and since then I have been taking acting lessons there'.

Many volunteers from the National School of Drama (NSD), including an expert, Shrivardhan Trivedi, regularly visit the school to hone the acting skills of the children.

Although Rahul enjoys his stint in films, he is worried his studies will suffer due to his acting schedule.

'I am worried about my studies as I have to miss school for many days while I am shooting. Although my teachers and classmates are very cooperative, it is difficult to manage both,' Rahul said.