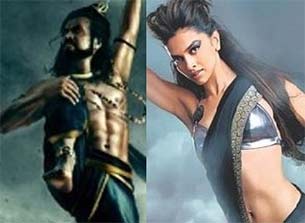 Very early in her career when she did two back-to-back double roles in "Om Shanti Om" and "Chandni Chowk To China", Deepika Padukone got to do some martial arts in "Chandni Chowk..." But that was nothing like what she has done in the forthcoming Rajinikanth release "Kochadaiyaan".

"I come from a family where sports is a given. We are very outdoor types. Doing my own stunts on screen is a dream situation for me," Deepika said.

Her one ten-minute stunt in "Kochadaiyaan" has been choreographed by Peter Hein, who was also responsible for the stunts for Rajinikanth's "Robot". Apparently, Rajinikanth personally requested Hein to make Deepika's action sequences "super-hero style".

Deepika's stunts in "Kochadaiyaan" are described by the film's co-producer K. Murli Manohar as "never-seen-before action by a female star from any part of the world...on a par with Uma Thurman's 'Kill Bill' and Angelina Jolie's 'Lara Croft'."

"She did extensive rehearsals for that one sequence. I don't think any other actress from anywhere in the world has done what she has. No concessions were made for her gender. She had done the stunts like any leading man," Manohar said.

When asked to describe this action sequence, the film's director Soundarya Rajnikanth said: "It's a fight with lots of acrobatic action. Deepika had to go through continuous and swift movement through various locations at a lightening speed. It's like a car chase on the feet."

"Bamboos and spheres were used. Action director Peter Hein has choreographed this sequence like he would have choreographed for any male hero. I feel it will be one of the highlights of the film," she added.