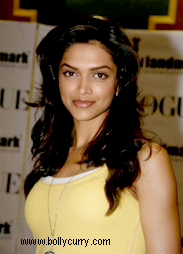 arlier BollyCurry reported an exclusive glimpse of the much awaited item song in Rohan Sippy's eagerly anticipated, Dum Maro Dum, featuring the tall beauty, Deepika Padukone.
The actual screening of the song is set to release on March 12th, the exact date when the 'Men in Blue' play rival South Africa in Nagpur. However, the Om Shanti Om debutant has decided to give the event a miss. The young actress is currently shooting for her next venture, Aarakshan and apparently cannot devote any time to rehearsals for this particular event. Moreover, the song will be launched during half time with the inclusion of exquisite dancers as well as the Dum Maro Dum team dancing to the tune. A crowd of a whopping 45000+ is expected to witness this event!
Time for the Sheila and Munni to give up the charts?