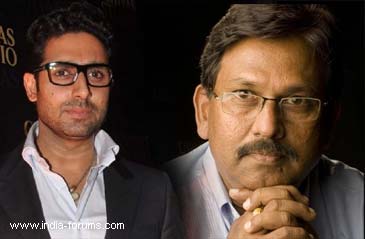 Makeup man-turned-director Deepak Sawant, who teamed up with Bollywood megastar Amitabh Bachchan for his Bhojpuri films, says that he will cast Abhishek Bachchan in his next.

"Abhishek has approached me and said you have cast my mom and dad in your film when are you going to cast me? So in next film, Abhishek will be playing a key role," Sawant, who worked as Big B's make up man for 40 years, told IANS.

"The title of the film is 'Ganga Ramji' and Abhishek will be there in the film. The film's subject revolves around politics. I will make sure that he plays a prominent role in it," he added.

He says that he was keen work with Aishwarya Rai or Katrina Kaif in the movie.

"I had earlier approached Aishwarya Rai for the lead role in 'Gangadevi' but due to her pregnancy she couldn't do it. Later, I approached Katrina Kaif for this film but she had date problems. Finally this film was done by Pakhi Hegde," he said.