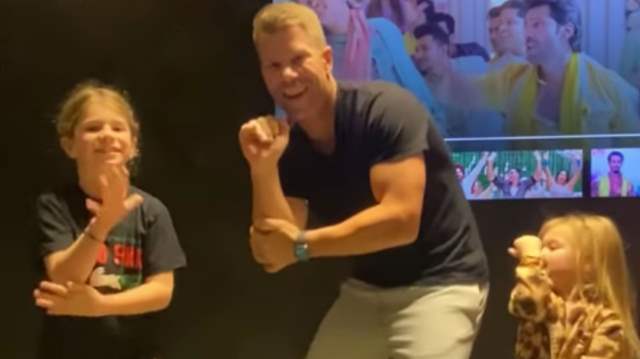 Making short clips on Instagram and vibing on trending Bollywood and other songs have become a thing. As a song shoots up in the reels section of Instagram many people indulge in the trend and create short videos.

Lately, it was the peppy song 'Naach Punjabban' from the film JugJugg Jeeyo which featured Varun Dhawan, Kiara Advani, Anil Kapoor and Neetu Singh that was trending in the reels section and had captivated everyone's minds.

While, many Bollywood celebs have already shook their legs on the hook step of this party track, joining the bandwagon is cricketer David Warner along with his kids. The cricketer took to his Instagram handle and shared a video wherein he was grooving on the hook step of the song his sweet daughters. In the background of the video, the song was seen playing on his TV screen.

Sharing the video, David wrote, "We are back at it again!! @varundvn #whatstep #socoolfamily #fun". David seems to be quite enamoured with the Bollywood tracks. In the past few months he has created many such reels on popular tracks.

Nailing the hook step of the popular song, David Warner was seen holding his eyebrow and patting his (imaginary) moustache while mimicking the song ‘Maar Khaeygaa’from Akshay kumar's film Bachchan Paandey in his previous reels.

He created a huge buzz when he mimicked Allu Arjun's style from the film Pushpa.  A few social media users also requested filmmakers to star the cricketer in their next flick while also complimenting the sportsperson’s acting skills.

Talking about the film JugJugg Jeeyo, it is doing well at the box office and the film has managed to cross the 100 crore mark globally. It received rave reviews from the audience as well as the critics.

+ 10
2 months ago David Warner and his kids r adorable lol.