As the loveable dreamer with a learning disability in Aamir Khan's directorial debut, he won the critics' prize for best actor in the Filmfare Awards last week.

Darsheel was nominated in the best actor category, the first such honour for a child in the 54-year-old film awards. Never before had a child artiste competed with established actors like Shah Rukh Khan for the best actor's crown.

'The award has certainly opened a new door for child artistes in the country. It provides a complete new platform for children,' Darsheel's mother Sheetal Safary told IANS on phone from Mumbai. 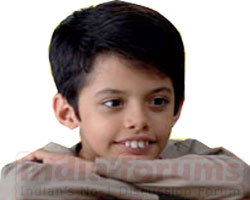 Although Shah Rukh bagged the best actor's prize, Darsheel and his mother are happy with the fact that the industry has started recognising children as actors.

'We were not expecting the award, we had just asked for a nomination in the best actor category. And the nomination was a big achievement for us,' Sheetal said.

The focus on children and family cinema has dramatically improved in Bollywood with more and more production houses venturing into the genre. And Darsheel gives hope to child actors and widens the scope for more child-centric films in the future.

Children today are far more mature and if guided, then can be a safe bet at the box office. And Darsheel is a case in point.

'Yes, the kids are really talented and I think a filmmaker can achieve what he wants to by explaining scenes and dialogues properly to them,' Sheetal said.

It was Shiamak Davar who suggested Darsheel to Aamir Khan. 'It all happened when Amole Gupte (the film's writer and creative director) came to watch Darsheel perform at a Shaimak Davar show. Even Shiamak Davar recommended Darsheel and then he auditioned before Aamir Khan.'

In 2007, Bollywood latched on to child-centric films and churned out quite a few with kids as protagonists. Bobby Deol teamed up with Dwij Yadav in 'Nanhe Jaisalmer', Vishal Bharadwaj's 'Blue Umbrella' saw a new child artiste, Shreya Sharma, rubbing shoulders with veteran Pankaj Kapur and Rahul Bose teamed up with Zain Khan in 'Chain Kulii Ki Main Kulii'.

Apart from that, a spate of animation films, including 'Bal Ganesh', 'My Friend Ganesha' and 'Hanuman Returns' crowded the box office.

The commercial success of 'Taare Zameen Par', which has mopped Rs.370 million, and the best critics' award for Darsheel, has inspired several filmmakers to explore the genre.

Among them, the most important is Shah Rukh's film for children. The superstar will spend an estimated Rs.1 billion for the film, which will be in the VFX medium, using computer-generated special effects.

Apparently, it will be the costliest Bollywood movie so far and Shah Rukh is looking for a 12-year-old boy to play the key role with him in an Indian version of 'Spiderman'.

Post-Darsheel, there should certainly be plenty of takers!